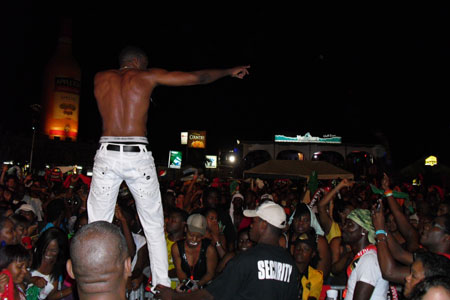 Photo: Shurwayne poised on the barricades commanding the crowd to Palance

Kingston, Jamaica, April 3, 2011 - “Watch we on the road... like Paparazzi” his 2011 soca hit was the stage entrance for Shurwayne Winchester and his band Y.O.U. minutes after 12am on Friday at the Mas Camp. Powered by Appleton and Pure Country the night was set to infuse the true “Spirit” of Carnival and Shurwayne Winchester was the ringleader. A masterful set was skillfully unleashed as he did a throwback to songs like Black Stalin’s “Tonight the black man feeling to party” smoothly into Kees’ “Wotless”.

“Lights off!” “Shirt off!” Shurwayne’s ripped chest sent the ladies into a screaming frenzy as he announced that he was "setting the stage for all genres of music". He featured hip-hop songs like “All I do is win” and tested the crowd’s appreciation for techno music mixed with dancehall. His play on a musical fusion of genres generated a wild party vibe. Appleton rags were used as propellers and the Pure Country VIP joined in as Shurwayne had them moving to the left, moving to the right, down south and up north. As if the crowd was not already in a trance he then commanded the crowd to “Palance”. Getting closer to the crowd he made his way from the stage and poised from the barricades instructed all of Mas Camp to palance to the Pure Country tent.

On returning to the stage Shurwayne launched into his catalogue of soca hits, “Dead or Alive, Can’t Wait, Alequa, Band Coming” and more. The crowd demanded an encore and as Shurwayne returned to the stage it seemed like the energy never stopped closing the show with “Open the Gate”. DJ Kurt Riley feed the crowd even more energy with Skinny Fabulous’ Charge Up and Head Bad tunes, clearly this crowd was ready to party from night til morning. Riley had the crowd taking true advantage and in a wild hypnosis of soca with Iwer’s “Come to Meh”.

Appleton and Pure Country truly brought the Mas Camp Carnival Spirit to life and will do it again next Friday themed Conquest as Iwer George is set to perform alongside DJ Smoke of Renaissance. Pre-sold tickets are $1,000 and $2,500 VIP, Pure Country and Appleton included available at the Mas Camp and Salon Splurt, UWI campus.