OMG! Machel has RETURNED with a BANG!!

New Juice (me) pulled up at Zen around 10:30pm, a time thought to be very, very early by New Juice standards. HOWEVER it was late according to Machel Montano standards! Cars were parked as far as two blocks away, and all by the hospital.

CROWD:
The ladies inside looked AMAZING..... girls were just wining no matter who was behind them, especially when Machel sang hit song "Illegal" ... Make that thing just wiggle!!

VENUE/ACCESSIBILITY:
Zen is one of the most accessible clubs in Trinidad, so anybody who had problems finding it ..... MADNESS!

Imagine Zen packed at 11:00pm ... with GIRLS! I saw at least 30 girls I would love to marry!! :-) At 11:30 when they annouced that Mr. HD himself was coming on stage, everybody rushed to the stage crushing poor me in front. Montano started off his set with "Coming Again", and then he made his way through the album singing "Hard Wuk", "Bend Over" and "So High A.O.A" amongst the hits. However, the songs that really had the Zen crowd going crazy were Road March contenders "Advantage" and "Illegal".

Some guest performers on the night were Kes, Benjai and Cassi who really had folks going with their songs. The ladies loved Kees especially. Now I think the highlight for the night was Machel's remix to G6 which had the entire crowd singing along. Everybody in the crowd had a time, even in VIP, people were wining low. 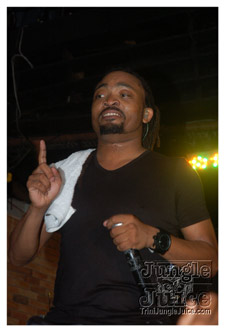 FOOD & DRINKS:
Zen bars are always great... especially when the bar staff get involved in the party as well.

SERVICE:
This was one of the BEST Zen RAH Wednesdays..... EVER!!!!
HE DID RETURN! Machel Montano really flattened Zen with his Return! I can't wait till his next performance. Good luck in Soca Monarch. I'm supporting you strong!! Thanks to Zen for once again having Trini Jungle Juice on the inside.