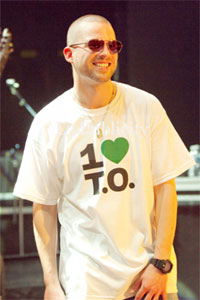 Arguably, Collie Buddz is one of the highest selling Reggae artists representing the younger generation Reggae music lover today. His first album, ‘Collie Buddz’ debuted at #1 on the Billboard charts for Reggae in 2007 (with strong sales from Canada), and the young Bermudan hasn’t slowed since his grand entrance.

Performing on Tuesday night at the legendary Opera House on Queen Street East, Collie, supported by the group New Kingston, and intro’d by Reggaetone sensation Las Rakas, gave fans more than twenty dollars worth in entertainment, and easily sold out the 750 person capacity venue. Fans lined up for the show at 6pm; by the time the doors opened at 8pm, the line up was around the block and then some. Most fans walked with their blackberries and i-phones to record their Reggae superhero for the purpose of a ‘playback,’ while others walked with their Bermuda flag which they waved proudly during Collies performance. If those two were not enough of a demonstration of fan dedication, try every person in the venue singing every word to every song so well, there were times Collie didn’t have to sing ... he simply held the microphone out to the audience!

“Performing in Toronto is like coming home,” said the Reggae star before his show during sound check. “Most of my first album was written here in Toronto (with the exception of three songs), so it’s definitely special for me.”

Collie’s roots with Toronto are extensive. Although born in New Orleans in 1981, he lived in Oakville, Ontario from the age of one to five before moving to Bermuda in 1986. He lived in the city of Toronto as an adult for a short time, but Toronto’s burgeoning music industry wasn’t ready for his talent, causing him to move back to his Mother’s homeland of Bermuda. That move would prove to be the beginning of his now rock solid career.

His musical growth on the island is in part attributed to his older brother who owns his own recording studio. In the early days, Collie would perform dubplates (calling a DJ or sound system name within a song written by the artist) for sound systems who all agreed the youngster had talent. The more dubplates he recorded, the more his music was played in the underground Reggae scene causing his fame to spread amongst the DJ’s as well as the fans. By the time he released his album, he had a loyal following of die hard Reggae fans around the world, and also earned the admiration of veteran Reggae artists such as Beres Hammond and Maxi Priest.

“I still record the same way I did when I began! My brother Matthew (“Smokey” Harper) and I will sit in the studio with our note books and write out lyrics for songs.” As for recording, Collie knows a great deal about studio engineering as he graduated from the school 'Full Sail' in Winter Park, Florida with an 'Associates of Science Degree in Recording Arts' in 2001. This is what gave him the foundation for his engineering expertise in the studio, and his ability to capture the exact sound he wants to hear. “I make music that I like, and that I think sounds good. If it doesn’t sound good to me, I can’t release it.” His millions of fans around the world would agree. Simone from Toronto, who was at the show on Tuesday said “my favourite song from ‘Playback’ is “Holiday,” and my favourite song from his first album is “Blind To You Haters!” “Collie makes music for me!”

“Holiday,” speaks to the people who work hard and just need a holiday from the stress and the bills, while “Blind To You Haters” picks up on a youth driven theme of being ‘hated’ on; the equivalent of so called friends not wanting you to elevate to a higher level.

On the flip side, Collie Buddz work with Beyonce on the remix to her song “Ring The Alarm” as well as his work with Dr. Dre, Snoop Dogg, Akon and Busta Rhymes are all indicators that his brand of Reggae is desired in the mainstream market, as are his ‘I got my ear to the streets lyrics’ which consistently ‘reps’ for the masses he performs for.

Growth for the young artist musically has also meant growth for the young artist from the business of music perspective so ‘surrounding myself with good people is key to keeping everything going in the right direction.” His team includes his manager, Kevin Holness who maintains a steady overview of the artists goals, and makes sure the team consistently moves in that direction. What’s more, Dino and Igor from Mojiza Entertainment picks up on the endorsement angle which is what caught the attention of Live Nation (Charlie Sheen, Rihanna, Bruno Mars) one of the industries foremost tour and concert producers, as well as the Rum company Goslings who is the tours official sponsor. “With Collie we have a great brand,” said Kevin. “He has a great appeal with his fans, and he understands the business which both contribute to his growth.”

After the Playback tour, Collie will be taking some time off to enjoy his family, and then prepares to release his sophomore album. He won’t give details as to who some of the producers are, nor will he share the direction of the album, but knowing Collie, it will be another one for Billboard!