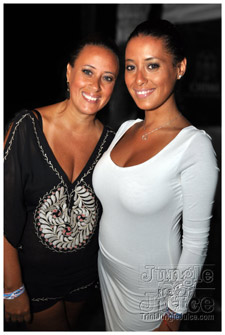 The 1st installment of the BayCrest 2011 Series: KAMPAi - Toast to the Nape was an uber fab ultra all inclusive party which had good vibes, great company and excellent food. And after last year's experience, TJJ and our newly joined friends were more than anxious to see how things would unfold this year.

CROWD:
The crowd was relatively large which featured sophisticated persons mainly from Kingston who were enjoying their Easter weekend in the Ocho Rios area. Now, we love nothing more than an event which is full of beautiful, all fashionably attired mature people. And Kampai did not fall short ... partygoers definitely put the "X" in seXy!

VENUE/ACCESSIBILITY:
The venue was beautiful and fabulous. The sounds of water flowing greeted us as we entered Dunn's River Falls Park. There was also a beautiful river streaming throughout sections of the venue which also featured lush green grass which the crowd partied on. However, the one drawback to the venue was the dance floor, which was more like 'dance grass'. A wood dance floor, platform or ground cover would have been ideal. 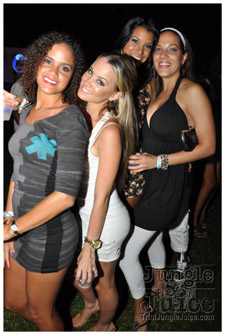 VIBES:
The vibe was great. Music was primarily provided by the vibesy DJ Bambino (cannot recall if there were other guest DJs ... no thanks to the Ocean Spray KAMPAI Shots Bar). The music was a mixture of soca, reggae (both "old and new bruk out tunes"), hip-hop and other musical vibes. Chris Brown's "Yeah x3" is still stuck in our head...

"Move your body, out on the floor
Put your troubles aside
And start living
Anybody can let go
Throw away all your problems
Cuz right now it's party time..."

Now it did take a minute for the vibes to build, but once everyone had their fill of food and were charged up with drinks ... it was ON! You like to drink, so do we!!

The event had premium bars strategically located throughout the venue. Appleton, Absolut and Chivas bar stations, also an Ocean Spray/Absolut/Happy Ice Shots (this was our favourite bar ... definitely a sure HIT!) provided all inclusive drinks for the night. However there were reports that they run out of certain alcohol beverages such as Appleton, White Rum (not good people) and Smirnoff Apple vodka... so we couldn't rate this category a perfect 10! 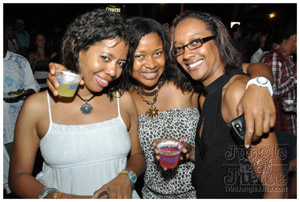 SERVICE:
BayCrest Limited most certainly know how to provide the highest level of service. From arranging executive round trip transportation from both Mobay and Kingston destinations with bar & treats aboard to ensuring lots of secured parking for patrons that decided to drive themselves, it was all smiles from bartenders and food staff as they served up their mouth watering concoctions and foods once inside ... right up until the music stopped.

COST/VALUE:
The cost of the party was $4500 JA totally inclusive. Personally I think it was a bit overpriced, and thinking $3500 JA is a better price range. But that's just my humble opinion as others will beg to differ... especially when you compare what one pays for an all inclusive in Trinidad, the States or Europe. Our very own TJJ rep from Martinique, actually found the price tag to be quite reasonable.

Overall the event was another success... tantalizing cuisine, amazing drink selections, good vibes and fabulous people. This was our second Kampai experience and it's only getting better and better .... Loving it!! Andrew, Dominic and team ... keep it up guys! Looking forward to the next BayCrest installment.

KAMPAI is now a permanent fixture our on Easter Weekend party calendar!!