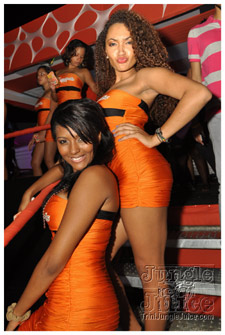 Substance Promotions presented their second installment of the Seven Deadly Sins line up  “PRIDE”. Sweet Juice enjoys nothing more than a themed party but figuring out a colour that suggested 'pride' wasn't as easy as it was for evergreen 'envy'. So we opted for an innocuous grey instead. Most patrons appeared to have the same problem and we were greeted by a variety of style and colour rather than monochrome. We said it before and we'll say it again … trinis know how to dress. Never one to dispute the benefits of comfortable clothing, Sweet Juice was still impressed by the many fabulous and sometimes frightening outfits that made their debut.

Like any respectable all inclusive, Pride promised a well equipped bar with the usual suspects - johnnie, black and white, smirnoff, beer, angostura etc. On behalf of all the non-heavy weight drinkers out there, Sweet Juice would like to once again express her gratitude to Angostura for coming out with their 'Angostura Rum Cocktails' stall which became a staple at most C2k11 events. It is so much easier to part with several hundred dollars for an all inclusive event now that there is something other than heavy alcohol and screwdrivers to drink. The only disappointment for the night was that half their usual drinks menu was unavailable! Shame. But Substance Promotions did promise that Saga Boy Mojitos would be around all night, and they were. Las Lap and Pink Lust were greatly missed though.

Pride also boasted a Shots Bar with Cooling Machine, Jaagermeister and the launch of two new shooters - Agua de Bolivia & Bad Angels which they delivered on. There were also puncheon snowcones being served at a separate bar near the stage, with trimmings of condensed milk and the works if you wished. No Mickey Mouse ears however. Well done Substance Proms on a unique and interesting twist to a regular drink! By this time, we had become a little too well-acquainted with the Angostura stall. But who doh love a snowcone? Besides, 75% was ice not so? Our liver said no but our heart said yes.

Between loaded snowcones and saga boy mojitos, Sweet Juice and Co. (hereafter known as 'Buffy' due to their tendency to 'wine on anything') was well into the swing of things, and unfortunately the review from here on in took a vague and sketchy twist and had to be re-reviewed by the more professional (and sober) TJJ staff. 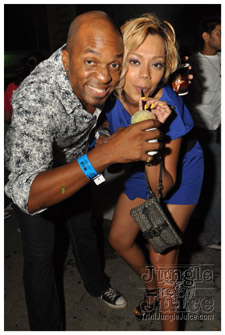 Then questions started running through my mind … When exactly is Iwer planning to stop singing soca and go live in Grenada? How does the female half of Swappilicious keep her glasses from falling off whilst being ridden across the stage? Why was a saddle not used? How does Swappi see in the 1am darkness of 'night' with sunglasses on? How did I get home? Just some of the many musings of a very pumped and mojito-filled Sweet Juice.

Buffy decided at this point that some food was clearly in order. Unfortunately, the inclusive corn soup, sushi and gyros were wasted on a Sweet Juice that was too wasted to be able to manage anything other than doubles - the quintessential recovery food. Making our way out of the party we vaguely remember promises of Angostura hampers and blackberry headsets to be won, then again TJJ staff doh qualify for that so …

Kudos to Substance Promotions for hosting another successful event.

Sweet Juice for the TJJ Fam