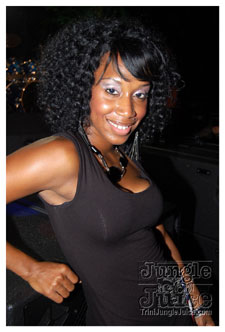 The third leg of this Carnival Relay, did not come without a fumble out of the blocks. But the good thing about a great athlete (Carnival Committee) is not how you fall but how you get up. And much like Ato Bolden or Hussain Bolt, the Houston Caribfest, once again burned the track with another star filled cast for the TX natives. With a venue change last minute that could have cost the committee their entire event, the Houston Caribfest organizers quickly found the next best place to host their celebrity artists like Rupee, Edwin Yearwood and Crossfire, Request Band and Iwer George...just to name a few. Not a small community by any stretch of the imaginary, the committee put out the SOS, and the APB as soon as details were finalized on the venue change. The end result....it was as if the Baytown Event Centre never existed. With that being said, it was off to the 'Banana Bend Beach' for the Baytown Comes Alive event. Better yet, it should be Banana Bend comes alive....as the event actually did!

CROWD:
The quality of the crowd was just as carnival fete oriented as can be. Being a Saturday night, the appeal was there. Come to think of it, I think Saturday is the only day of the week that has its own dress code. Won't you agree? People know how to dress on a Saturday....with class. Considering the venue, the placed was not slammed packed...but still had a large turn out.

VENUE/ACCESSIBILITY:
The venue, for a last minute change was good. If you were not aware of the change, one may consider this place ideal for such an event. The location was not as centrally located as you would expect around Carnivals, but it had all the amenities one would expect. Literally located on the beach shore, this location afforded patrons a bit of a reprieve from the high temperatures. The ambiance was good. Well decorated and lighted, Banana Bend just might be the right place the Saturday Night fete at Carnival time. Food for thought! For the band members and photographers, the stage was a bit small. But just like the band members, we know how to work the stage. Lastly, other than the dance floor in front of the stage, everything else was just sand....this certainly added curb appeal to the location. Overall, not a bad replacement by the promoters.

VIBES:
Any Carnival event having a combination of good DJs (setting the pace), live bands and top soca artists, there is no reason to think that this event will not have the right type of vibes. DJ Stephen...obviously the choice DJ for weekend, pumped up the vibes...as usual. By this time, we know what to expect from him. To kick things off on stage, MC Wassy, most definitely the # 1 hype man in the business, certainly did what he was paid to do...hype up the crowd. To the crowd's pleasure, Wassy was followed by the Request Band of NY, once again gave a great performance to the delight of the crowd. Though not having the opportunity to plays songs in their own repertoire or sing too many covers for the top artists, the Request Band did a fantastic job backing up the likes of Ragga and Lyrikal who both by the way, gave great performances. They both entertained and energized the large crowd on hand.The Request Band may be up and coming right now…but they are good! Promoters…take note. Prior to the band’s time on stage, Neil ‘Iwer’ George took his performance way back to ‘Bottom in de Road’ and came all the way forward with his 2011 hit ‘Come to Meh.’ The people’s artist, Iwer continues to give stellar performances throughout the 2011 Carnival season. To the close the night’s entertainment, Rupee and Crossfire, made their first appearance of the weekend and gave the patrons a taste of what’s to come. Rupee, possibly had every female at the event eating from his had. His consistency with performances makes him a fixture at so many events throughout the world. As for Crossfire, their performance was as sweet as honey. A Live Band powerhouse in years gone by, Crossfire proved on this night that they have not lost a step as they closed out the show around 4am. Overall, the night was a success. 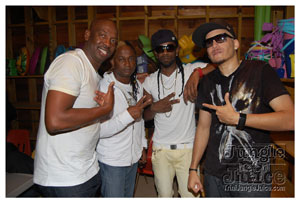 FOOD/DRINKS:
This event did not have a full compliment of vendors....possibly due to the venue change. The bar had top drinks but was a bit small. As far as food, enough vendors were on hand to supply the patrons with food during and after the show. The good thing is that most of these Caribbean vendors have a variety of foods on hand.

SERVICE:
Since arriving, the service by the promoters and staff has been exceptional!

COST/VALUE FOR MONEY:
The cost of the event was $25.00. Once again, it was a good price considering the line up. However, the performances were a bit short. I could see a $20.00 cover charge that would have attracted a larger crowd and worthy of the value.

Overall, the event was good. The performances were all a bit short, but understanding that the same artists were all performing at the concert after the parade of the bands, I guess we will get the real macoy then. Special love to Moida, Asia and her husband and the Atlanta crew. To Patrick and Nadine and your entire staff, a job well done. Aunty Lyris, it was nice seeing you. Also to Melissa and the Caribfest TV crew...much respect. Wassy, DJ Stephen, Sharon, Rea, Giselle, Trudy....TJJ love allyuh!!