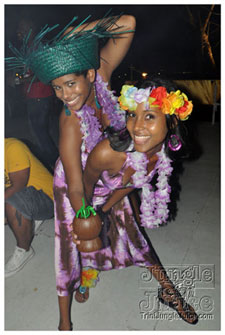 There's many reasons to love living in Trinidad. Nice weather, crab and dumpling, Carib, men (or women as the case may be), countless fetes... the list goes on. However, the numerous public holidays definitely have to be in the top ten. So as Sunday May 29th rolled ahead, Sweet Juice had more than one reason to be celebrating the arrival of the Indians to this sweet island. There's nothing like a Monday off to nurse a hangover and some sweet memories of the night before. So we headed down to 'Mai Tai'- another regular instalment by Caesar's Army. Not sure if anyone else received more specific instructions but Sweet Juice, armed with wing woman Buffy and a cheerful-looking fuschia pink concoction of Welch's purple juice, Malibu and vodka, headed off into the night in search of 'Paradise City'.

Our journey ended at Mobs 2. Not exactly what we were expecting but spacious, well-decorated with a decent enough view of the surrounding ocean and level girls in bikini tops and hula skirts- a paradise in its own right. While promoters upheld their promise of 'secure parking', what they didn't mention was that only about 50 or so cars would be able to fit. Everyone else was stuck outside. We were lucky to find a park fairly close after about 15mins of searching but once again it felt like almost the entire Chaguaramas stretch was lined with cars. Considering things started at 2pm, party was still pumping by the time we rolled up at 7pm. All the leis were already given out but Hula girls were still sharing shots and everyone was, by then, either drunk or sweaty enough to have started pulling off various items of clothing, revealing beach wear underneath. We could still see remnants of what must have been very swanky outfits but not much of the "coconut bras, grass skirts and straw hats" that the promoters demanded. What we did see was a lot of bareback guys in shorts and bikini-clad girls on top coolers ... good enough dress code by our standards! Some look like they needed a little reminding of what the inside of a gym looks like but all in all, there was bess-ness to be found in every corner of this fete. Some bodies look like they in shape for Carnival 2k12 already! 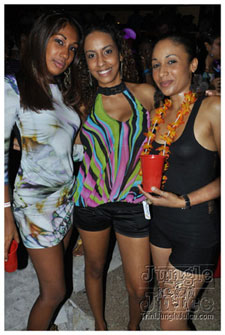 Sweet Juice had previously never been to a Caesar's Army promotion but always heard rave reviews. And being partial to any fete that includes anything free, we were liking this one already. Despite being a cooler fete, there was free tequila watermelon, Carib Pilsner and maui wowee shots. Not sure if everything but the Pilsner had finished by the time we arrived but, never one to refuse freeness, Buffy and co. decided now was as good a time as any to start drinking beer. And drink we did! Having never had more than a sip of beer before, 5 Pilsners and about a litre of welch's/malibu/vodka/stolen alco from various coolers later, we were running between bathroom and wining on any cooler in sight. DJs J-Lava and Ruan Legend kept the party pumping well past 2am when we left. Didn't enjoy the Hip Hop as much as most of the crowd but DJs otherwise kept up an excellent mix of Soca, Old School and recent Dancehall and even some Calypso!

Between the music, our newfound love for beer and the endless fit fellas without shirts, we really REALLY did not want to leave. And it seemed no one else did either. For a party that started at 2pm, it seemed that everyone stayed till at least 3am the next day. However, knowing what was to come the next day and the breathalysers that would surely choose tonight to finally make an appearance on the roads, we downed several pints of water, stuffed down some fries (not inclusive unfortunately) and headed out into the early morning.