Color Me RED - The Return Review 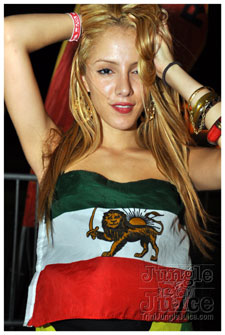 After at least 5 years, Machel Montano and the HD family finally returned to Saint Lucia! With our Glo Ko Ko and Bounty in hand it was time for us Lucians to take “Advantage” and “Show dem how we does wine!"

CROWD:
The crowd held up to expectations by filling the sectioned off portion of the cricket stadium all dressed in their sexiest RED attire.

VENUE/ACCESSIBILITY:
Walking towards the Beausejour Stadium for the first time, I headed straight for the VIP area where we were graciously greeted by the RED Unlimited girls!  At first glance the event seemed very well organized as we breezed through security and were directed to the right of the stage. The national cricket stadium had been completely transformed to host this major production.

Venturing into the VIP section, I noticed that it was completely separated from the regular admission by an 8 foot fence and barricades, something unusual for a Saint Lucian fete. Naturally I assumed that VIP would have the best view of the stage, yet only a 4ft window at the right end of the stage was left open. I guess I will be watching Machel Montano HD through the wire fence?! The Digicel VIP area had a great view as it was elevated but how will I jump and wave amongst the table and chairs? (though beautifully placed for those who wanted a non bacchanal viewing of the show) 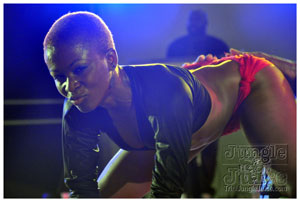 IBE:
The night started off with Toya followed by Marianne singing the sweet tunes of “Black Cinderella”. Next on the agenda was Teddyson John singing many of his groovy soca hits making the ladies shake their “big big bam bam” and having the fellas begging them to “come wine up on me”.  Moving on to his 2011 chart topping carnival hits Teddyson rocked the crowd with “out and bad” and “mash it up”. This started an attack on the 8 foot fence and set the vibe for the next local artist, Superman, who launched into “more mash up” and “how I want” sending waves of madness through the already electrified crowd.

As any other Machel Montano HD show I have attended, he came out with an incredible introduction as the crowd energetically threw their rags into the air. I have never seen Saint Lucian people with such enthusiasm as the music seemed to exhilarate them one song after another. The performance included many Machel Montano HD hits along with top songs from the 2011 Trinidad carnival season.  Throughout the performance the cricket stadium erupted with screams and excitement as Machel Montano HD worked the crowd. I can safely say Lucians “doh stick”! Patrice Roberts was also in attendance energizing the crowd with many of her well known hits adding to the great performance. To close the already amazing show our very own Ricky T performed “Madd Ting” alongside Machel Montano HD with a bit of “Advantage” mixed in. It was incredible to see the collaboration as the crowd truly was “mad and off”.


FOOD & DRINKS:
Included in the purchase of the VIP ticket was a small buffet, which I must say was quite nice and included an array of finger foods, along with a large dessert tray filled with chocolate and all kinds of goodies! Yumm!! (my plan was to drink up first and satisfy my sweet tooth later!) After filling myself with mini Roti’s and fish fingers I headed for the bar! (Drinks were also included in the VIP purchase) Thankfully there were 2 bars which made for an easy time to get drinks. 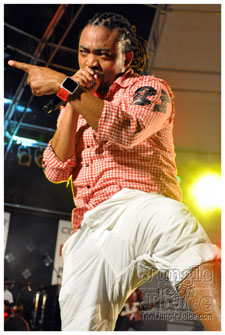 Unfortunately, after just a few hours I am sad to report that disaster had struck the bars! Despite having two seemingly well stocked bars, liquor slowly became unavailable. I began to run back and forth between the two bars to find something I was willing to drink. First to go was the Vodka then Scotch, and oh no... not de Rum!  Sigh, now we are left with only beer and water?! Despite the urge to “mash up and do a mad ting” I contained myself and headed back to the main stage for the final act- Machel Montano HD!

SERVICE:
I have to say the service of the staff was great! Though they were bombarded with angry revelers (due to the drink shortage) they handled it well and attended to everyone. Parking was easy and included a many officers patrolling the area for the entire night. Officers also assisted in parking each car strategically and ensuring ease of access to the event.

This event kicked off Saint Lucia’s carnival starting off the week with pure excitement and energy. Let’s just say the whole island was recovering on Thursday from Color me Red- The Return, making it an unofficial “Beese” day! We were now ready for de road!