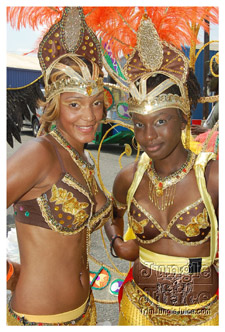 The weekend of July 29th - 31st...Carnival fever was certainly in the air. With the TJJ team split up over three separate events, one thing we knew was that we were all ready for the mas, music, food, wining and de blazing sun! So whether you were in Toronto, Barbados or Charlotte, NC with us...we know all those elements previously mentioned were constant. As for me....your loyal Joy Juice...I took the opportunity to cover the Charlotte, NC Caribbean Festival. And a Festival it was indeed. And knowing what Leon Coldero and Code 868 can do and the promoter's choice to bring them....one thing for sure was that this festival turn from "what? Charlotte has a Carnival?" to "Yeah boy..Charlotte Carnival has the potential to be built into something fantastic."

CROWD:
A true view of the entire Caribbean was evident. With several tents grounded and flanked by a national flag or two, it was quite possible that every caribbean country was represented. And if you know Caribbean people, you would know that if there is a place to sit (under there own tents) then you know they coming with every body...mommy, daddy, sons, daughters, babies, cousins, brothers, sisters, tantie, granny and nennen. The crowd was a multi-generation one, where everyone had a great time.  It was not large in relation to the venue, but according to the past years ratings, the crow grew a great deal. 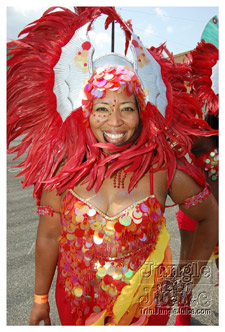 VENUE/ACCESSIBILITY:
The event was held at the Metrolina Trade Expo. This venue has both an indoor and out door facility. The Charlotte Caribbean Festival was held in the outdoor area and the father and the sun...showed no mercy sending a 104 degree heat to Charlotte, NC. With shade only limited to the the patrons tents, those who did not prepare well...felt the blow...full blast! The sad part is that many people left the venue due to the heat. Maybe a tip for the promoters....secure a large tent or two and have portable chairs available for use and have a few industrial fans available.

The decor was at the discretion of the patrons and how they set up their tents. However, there was an obvious line where the tents could not go beyond, which afforded a large space for dancing in front the stage. The parade route was not too bad. It was a dirt road circular in shape, about a 1/2 mile long, and had patrons on either side that welcomed the bands. The place was clean but probably could use a few more port ah potties....I'm just saying! But a small thing to worry about. The location of the food was not bad but a bit far from the center of the stage. This made it hard for granny to walk to. We felt the layout could have been a bit better but we understand that it's a work in progress. Overall, we can see that if this Carnival grows to what it can be, this venue may be ideal. 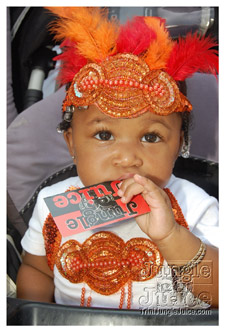 VIBE:
No one would be able to tell that this was a small parade....soca music was blasting from the two DJ trucks and the masqueraders took 'Advantage' of the road. When the parade and the jump up in front the stage was over, DJ Crazy C. was on point hyping up the crowd. After the jump up...the evening fell a bit flat with participation. This was not due to anything else but the heat. Then...the Caribbean Heritage Association of Trinidad and Tobago (C.H.A.T.T.) rhythm section got everyone on their feet with their jamming. With iron beating, you cannot go wrong.

To close the show, Leon Coldero and Code 868 literally brought the house down! Leon and his band sang every 2011 song in their repertoire....this was fantastic. They kept the tail end patrons on their feet to the very end of the show. During their performance, even Uncle Sam (no people..not America) stole a bit of the spotlight with both his singing and wining ability. You just had to be there to see and understand it. 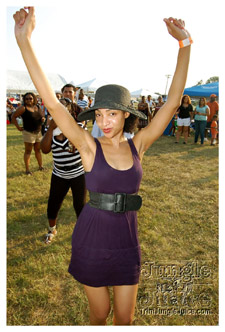 FOOD & DRINKS:
Food was not too bad but the drinks were limited to what could be bought at the Corona booth. It was a cash bar but a bit pricey. As for the food, the place to be was in the 'Nuff Respect Jamaican Cuisine.' They certainly got nuff respect as evidenced by the long lines they had. Another hot line was the 'Shave Ice' booth. the lines there were just as long. There was not a large variety of foods but what was there was sufficient for the crowd.

SERVICE:
The overall service was not too bad...However, it certainly could be alot better. One observation is that there should a media/hospitality tent for the artists and official media that were there, with access to water and food. This is important as we work all day to ensure we perform our jobs to the best of our ability. And considering the heat, water is a big deal.

On the other hand, we appreciate Linda and Leon for having TJJ there. Thanks for looking out for us.

COST/VALUE:
The cost to enter the venue was $10.00. A good price for families especially. This price included parking and the show. This was good. 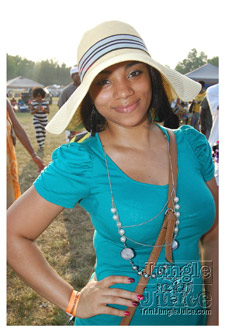 Overall, we were happy to be there, to bring another up and coming Carnival to the world. Charlotte Caribbean Festival has the potential to be added to our calendar of events. We are happy that you choose Trinijunglejuice.com to be one of your advertising representatives. Best of luck to you guys. We also ran into Patricia and Karan from the Atlanta Caribbean Carnival Bandleaders Association (ACCBA) who held their Atlanta Caribbean Carnival in May. It was good to see you guys. Shauna - Miss Charlotte Trini...it was good to see you and meet your family. Keep up the good work. Collin...much respect. Thanks for the love. DJ Ernest..it was nice to see you again man. Yuh really mash up that party. Elder John...much respect with your business. Paradize...thanks for the invite to your flag party. Much respect. Toast Man...ah catch yuh in de corner of a dance again...like yuhself. And lastly, Leon and Code 868, great performance and fantastic work keeping the crowd alive. You guys did your thing. Linda, we appreciate the love. all the best to you and the CCFA for 2012. We look forward to being there.