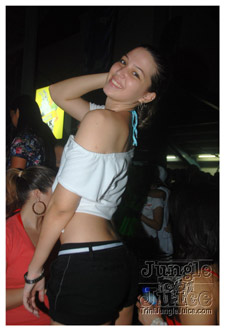 Party rock is in the house tonightEverybody just have a good timeAnd we gonna make you lose your mindWe just wanna see ya shake that RED FISH!!!
It was time for the TJJ Family to head to the court yard at the Queen’s Park Oval to try our hand at sport fishing to try to catch a Red Fish!

This third instalment of Red Fish was the cooler wet fete for the young and the young at heart over the Emancipation Day long weekend in Trinidad.  These party people of tomorrow all clad in beach wear decided to show a veteran like me what true non-stop parting is all about!!!

The party started with this predominantly university student crowd pouring into this spawning pond located near the northwest stands of the Queen’s Park Oval.  And even though I did not see any real Red Fish in this school of fish, there were certainly a lot of Reds swimming around!  This definitely got Jokey Juice all excited as he continuously baited, reeled and tackled anything to only end up empty handed!

The vibe reverberated with energy as beautiful Rainbow and Mandarin fishes climbed onto every cooler displaying lots of fist pumping and jumping for every song.  But then DJ Merry Perry mistakenly took the party for Fatima Mayfair as he started his “girls role call’ not by their area code but instead by the secondary school they were still attending… “Where is my Convent Crew?!!”  That roll call quickly got men worried that there could be a good chance of being charged with a statutory offence tonight!

The energy then hit a crescendo at 1am as the overhead sprinklers were turned on!  This cooling system had the opposite effect of heating up the party as everyone started to take off their clothes.  The water flowed non-stop till the end of the fete!!! 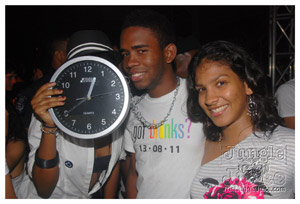 There was also a well stocked premium bar that served little purpose as the over zealous crowd brought enough drinks in their cooler for themselves and everyone else!  There was also no food on sale which was clearly not an issue to this “amped-up” crew.

And since I am “salt fish” with the ability to mix with any type of crowd I was able to catch a couple of prized fishes in the swimming around in the fete, while I noticed that Jokey Juice was finally able to catch a Wabeen!  In the end with an energetic crowd and non-stop water Red Fish has solidified its claim of being a must go to event!

Did We Forget Anything!? Leave Your 2 Cents Below ...