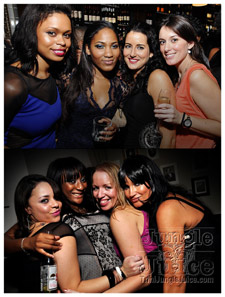 Ah boy it's time for 2012 in London...and for most that usually means over priced, over crowded and over rated!!! So when we heard a rumour that Buspepper were bringing an intimate affair to see in the new year, and with Popot Barbie Juice in town...it's off to London town we go !

Now this had to be the most obscure place to find, and the long walk from the car was pressure as we wandered around, finally arriving at the venue at 11.55!!! Phew!!! Heading downstairs into the Balls brothers venue, we felt like we were walking into someones living room with quaint old English decor, complete with rocking chairs ! (came in handy as a wining prop for some!!!) was this a house party ??? Lol... It was definitely an intimate ( and a lil sweaty) venue and as accustomed for bringing in the New year, peeps came out in their best outfits...we talking sequin play suits and hot pants galore!!! bling bling! Eye candy was  limited but who cares... where's the bar ????

For a New Year's fete, keeping it small was a bess idea, especially when not having to queue for a drink for too long... drinks were reasonably priced, well when we say 'reasonable' we mean London prices...get used to it ! If you don't want to start the New year broke, get someone who is already drunk to part with their credit card instead !!! Food was advertised to be there from 2am...but unless it was hidden in the cloakroom, we don't know what happened there... not even a sniff of New Years food in sight left some people running off to McDonald's to sober up for the drive home !!!

Music was pumping with soca old and new, reggae, dancehall, electro and hip hop jamming right through, left most people sweating in their sequins until it was time to head home...a sweet little warm up to start the year it's time to bring on more 2012 soca now, the New Year is here, get ready for carnival...This gyal is trouble, causing so much trouble, when she start to bubble, and winin up she waist, this gyal mashin up de placccceee(aye) Trouble !