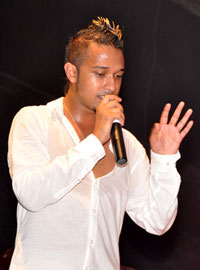 Port-of-Spain, Trinidad. January 27, 2012 -- It’s a fete that the people of South Trinidad truly anticipate annually. This year Sexy In Black comes complete with the assurance that the brightest stars will give them a memory to hold on to for years to come.

While many Southerners remain concerned over the move of the Chutney Soca Monarch Competition from Skinner Park in San Fernando to Port-of-Spain, organisers of Sexy In Black are saying, “South crew, you never have to worry- we’ll always come to you.”

Adamant that the people of South Trinidad are deserving of a Carnival fete that belongs to them in every sense of the word, organisers are making this year’s fete, a cut above the rest with acts like K.I. of JMC Trivini, Ravi B, Nisha and Karma, Farmer Nappy, K-Rich, Kerwin Du Bois, Super Jigga TC and a band that’s truly appreciated by all fete lovers, Kes The Band.

With sponsors like Bailey’s, Black and White Whisky, American Stores, Smirnoff, the NLCB, Stag, Monster and Blue Waters- patrons are being treated to only the best on February 4th at Paria Suites car park in La Romain. “ This fete is for the people who appreciate a really good time, in an atmosphere that embraces them with other beautiful people like themselves,” said the event spokesperson.

K.I. whose hit for the season, ‘Single Forever’ is causing quite a stir these days, promises to deliver a spectacular stage performance ad does Super Jigga TC who says he’s ready to take his ‘Action’ to the people of South Trinidad. Kerwin Du Bois who continues to be credited for delivering the hits this season is also on the cast. In recent weeks, Du Bois has been the centre of attention at fetes. His single Bachannalist has taken off with many saying it just might be the single to steal the Groovy Soca Monarch competition in 2012. His upcoming performance at Sexy In Black will give Southerners the chance to see up close, and decide for themselves. “This event is always an intimate one. We’re advising people to get there early to enjoy every moment of the experience and as we have always mentioned, this event keeps patrons of the South close to home, something that we believe would curb any type of road injury in the upcoming weekend,” said the fete’s representative.

Tickets for the Saturday night carnival shindig are said to be going fast, with most patrons purchasing in excess of four tickets at a time. “We know we’re going to see a lot of crews. People need this stress reliever and we’re prepared to give them a night of real carnival enjoyment, to make them all enjoy.”