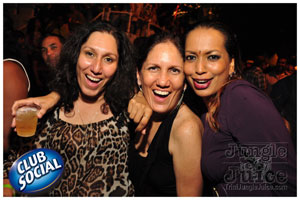 San Fernando we comin’ dong , all the action this Saturday was down south for the annual all inclusive fete, SOUTH CANCER.

A first time for trinijunglejuice… me, daddy juice, and d’young juice were pretty excited to experience what friends have always called a « must do fete ».

A long drive, but who cares, the biggest stars of the season were on the list, Machel Montano HD, Kes the band, and it was also an all inclusive fete, drinks, food in abundance, all those arguments couldn’t fail at all.

We headed out to the fete late at about 8:00PM considering the south cancer fete was from 5pm until 12pm. We reached the San fernando Hill and parked in no time. A service of comfortable shuttles was available to climb the hill and bring you to the entrance, and in less than two minute, we were there.

San fernando hill is an outstanding place to fete, the breathetaking view was simply beautiful, it was a large and clean area. 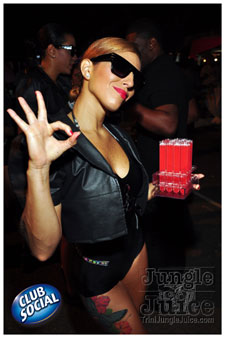 The food station were located on the right, and bars and stands around a big stage. Enough space to dance and have fun.

Machel was on stage when we got in, so just imagine that scenario when you reached a fete with the fever and energy at this top, no warm up, you are embraced straight in the bacchanal mood.

I Had to catch up with some drinks, Service was in lightning bolt style! An all inclusive with no wait at the bar is already a thumbs up in TJJ books. With a drink in one hand, and camera in the other, it was a real balancing act. But We TJJ have skills, no scene.

The place was filled with a lot of people, mostly indian, all kind of ages, some hotties all around and the 3 zero girls were giving away a multitude of shots served in a plastic tubes, trust me something to blow your mind fast ahaha.

Walking all around the venue, the crowd was having rell fun, wining and singing loud all the soca hits of the season. While waiting for the appearance of Kes the band, I had some food, between the diversity of tents with cuisines from all origins ,  I picked up the japanese tent, and got some rice and jerk chicken, japanese authentic food you said mmmmm ehehehe well just enough to soak up the alco.

Kes came up on the stage and the fever was back on track until the end of the fete at 12. A great performance with lots of energy. People had no doubt a time.

Even with a price of 1000 TT to support the cancer society, that party didn’t fail, all conditions were reunited to spend a fabulous night.