Enjoy A 'Blast From The Past' This Friday At Bacchanal Fridays 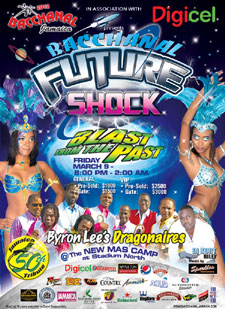 (Kingston, Jamaica – March 06, 2012) – As a tribute to Jamaica’s 50th year of Independence, Bacchanal Fridays presents a “Blast from the Past” this Friday March 9 at the new Mas Camp, Stadium North starting at 8:00 p.m. In commemoration of the country’s milestone, patrons will be treated to the older soca grooves courtesy of Byron Lee’s Dragonaires and FAME 95 FM’s ‘Party Animal’, DJ Kurt Riley.

The ‘Future Shock’ soca season continues this week with more jumping and waving with music from Jamaica’s oldest soca band, Byron Lee’s Dragonaires. Officially founded in 1957 by the late Byron “The Dragon” Lee, OD, OJ, the band has survived the decades, constantly transforming and re-shaping, making them a staple at soca events both locally and overseas. Originally called Byron Lee and the Dragonaires, the band was initially known for their ska and mento songs, and was a fixture on the hotel circuit in the mid-1950s, even providing backing music for many visiting artistes including Chuck Berry, Sam Cooke and The Drifters. In 1959, the band recorded their debut single “Dumplin’s” and during the 1960s, was known for ska hits including “Fireflies” and “Joyride”. The band started expanding their repertoire into the 1970s, playing everything from rock and roll to rock steady to Latin beats, developing a name as a versatile band.

The band’s musical focus would shift yet again after Lee met noted calypso king, The Mighty Sparrow in 1963, a friendship which would last for many years. The band’s expanding soca and calypso style propelled them to play in Trinidad & Tobago’s Carnival Road March in 1974, and later on they would be named ‘Best Band on the Road’. The popularity of the band continued to grow and was further concretised with 1985’s well-known soca hit “Tiney Winey”, and in the 1990s, hits such as “Soca Butterfly” and “Dancehall Soca” earned them the credit of creating the ‘ragga-soca’ style. The band’s success continued into the 2000s with Lee being recognized in 2001 by the Caribbean Brass Festival Organization for his undeniable contribution to music. Sadly, the region would bid goodbye to this musical legend in 2008, following his long battle with cancer. The band’s name was then changed to Byron Lee’s Dragonaires and today, they continue to carry the torch of ‘The Dragon’ with tours and performances worldwide, including their double stint as opening act and backing band at the recently concluded Jamaica Jazz & Blues Festival 2012.

The night will also be complemented by juggling from DJ Kurt Riley who is a socaphile at heart. Riley is one of Jamaica’s sought after disc jocks and is also a respected producer. Patrons can expect an entertaining night with respect given to the calypso and soca forefathers who paved the way for the artistes of today. Patrons can also enjoy promotional offerings from headline sponsor Digicel and major sponsors Pure Country, Appleton, Smirnoff and Jamaica Observer. The Bacchanal Jamaica costume tent will also be open for persons to choose their ‘Future Shock’ style for the April 15 Road Parade. Along with the sexy and revealing offering of costumes from sponsors, there are also t-shirt options available from Digicel and Pure Country. Digicel’s t-shirt option features a t-shirt and shorts option for male and females while Pure Country has two options: a tank top and hot shorts section for women and a t-shirt and shorts option for both men and women.

Ticket prices for Bacchanal Jamaica’s “Blast from the Past” are $1,000 pre-sold/$1,500 at the gate for general admission and $2,500 pre-sold/$3,000 at the gate for VIP patrons. Bacchanal Fridays happens this and every Friday at the new Mas Camp, Stadium North with Socacise open to the public on Mondays and Wednesdays, 6:00 – 8:00 p.m., free of cost.