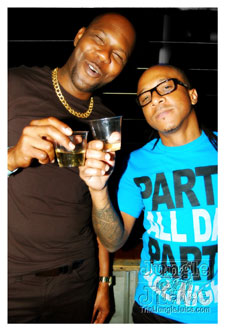 The Annual Flag Party was a hit. Good music, good location, experienced promoters and lots of women, usually makes for a grand event. We TJJ does not intend on missing this event no time soon.... you shouldn't either.

CROWD:
The place was packed to capacity. filled to the brim, the top running over, ram cram, people deep, the crowd thick, Laaaawwwwwdddd look at people.... and in between all of that, the sexyist of the sexyist came out in their best wear. As always the Demolition crew made it and was deep.... and as the night went on.... one by one, the big names began to pop up in the flag party.  At one point... Benjai, Kerwin Du Bois, Giselle De Wasi One and Lyrikal were just hanging back in a corner.... but having a time. The ladies were well dressed and some of them donned flags and rags of their national countries.

VIBES:
In approaching the place, we were not too sure that this is the best place for a flag party. However, after entering... we were astonished of how huge the place was. The decor and layout was great. The ceiling was high so air could circulate and not make the place too hot, it was clean and there were a variety of levels for you to take your pick. The vip section was overlooking the floor and played host to many entertainers, DJs, and patrons willing to spend the big bucks.

FOOD/DRINK:
The vibe was, as it has been for the past 5 years we have covered an Atlanta Carnival, very very good. The place was packed to capacity and as we walked in... DJ Stephen and Giselle immediately gave TJJ a big big shout out! Once again, True and his team pulled off another successful event, where the patrons knew what they were getting. I know for sure Collin, Troy and I had a great time.

FOOD/DRINK:
Some We did not spend much time with the food at the venue but the drinks were reasonably priced by the cash bar. This you know when everyone has a drink in both hands.

SERVICE:
Krushmore cannot get anything less from us than a 10. They truly deserve it. To give you an idea of the service we receive from Krushmore, when we got to the entrance... promoter True just walked by the security and said to them as he pointed at us... "These guys here... are always good, handle them!" And that was it.

COST:
The Flag Party kicks off the Atlanta Carnival event coverage and to come out of pocket only $25. It was well worth it.

Much respect to Giselle, DJ Stephen, Kevy Kevy and all the other DJ's that lit up the place. True, thanks again for taking care of TJJ. We appreciate it. Your event was well planned and organized.