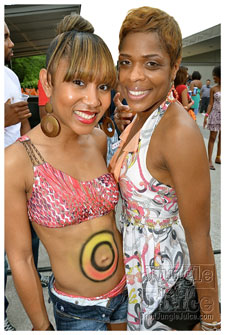 Ohhhh....Myyyy....Laaawwwwddd" Was the response I got when I texted our trusty Cameraman.....My text was simple.."Hey Al..I'm running a bit late...see you in a few. BTW, how's the session." The thing is, I wasn't sure if this meant a good thing or a bad thing. I was a bit worried! As I walked into the Capitol Skyline Hotel....a smallie walked by me in a bathing suit. Then two more....in bikini's. As I got to the ticket counter....I politely said.."Hello..I am..." and no sooner....all I heard was..."Ohhh...Trinijunglejuice...go through man...here's yuh VIP all access...and like yuhself"! Like mehself? What was going on in there, I asked.....And as I entered the pool area....my cameraman was right on the money....OOhhhh...Myyyyyyy...Laaaawwwwdddd.....If you see bikini's in and out of the water...Hector and the Mystic Vybz family was playing and people wining in the pool, throwing hard waist...defying the science of aqaumarineology.....if there is such a thing. Geeze an ages...talk about nice session!!!! Hookie kicked off the 2012 Carnival Season in a big way. One thing is for sure.....Next year....we will NOT...and I repeat....NOT be LATE...three hours left on the clock for me was too little!

For the crowd...it was not the biggest we have see but there was still a great deal of people. As for looks, there was no doubt that this was a sexually appealing crowd! The only thing we could say was wow! The best of the best came out for this one. The women were stunning and I am sure plenty of the fellas...do ah lil push up or somtin before they come through....but sooo sorry...I am straight...I have to focus on the ladies. And even in bikini's...I realized there is a trendy way to rock them...just imaging the sexiest bikini you see... at least the top half and short jeans with the zipper down...just giving you a little view... just a peek... enough to have any man breaking his neck!

As for who was on the inside....Scarface was there taking a little view... and Kurt Floyd and some of his girls were there. And people, you cannot mistake his girls from anyone else. And if you are not sure, look closely... I took a shot with two of them! :-)

The venue was descent...The Capitol Skyline Hotel address was easy to find, parking was ok...and the pool was huge and very modern. The decor was good and well thought out...not too much....but good enough. The weather was great by the way....

The excitement here was never ending. Funny enough...it was supposed to rain that evening and no one cared....and for good reason.... DJ Hazzard, Spyda the DJ, Mystic Vibes, NY's Supa B, Baltimore's Half Krazy, and Miami's House Arrest ... Need I say more? Ok, since you insist...Ladies in Bikinis all over the swimming pool...inside and outside.....need more convincing that you missed a boss session? Ohhh ... Thanks for understanding!

The food and drinks were very good. We grabbed a bite and I believe it was the hotel's catering staff that hooked it up! Drinks could be found by the cash bar easily.

As for service....it was good. We had no issues, Hector took care of us as promised. TJJ was happy at the end of the night. We certainly appreciate the fact that promoters see our value to them and to their patrons. Thanks promoters!!! BTW....the video.... looking boss. Hookie video dropping soon!!

The cost was very efficient. The numbers inside the party proved it. I do not think anyone left there complaining...and if they did, they lie!

To close this off...we were happy to be at Hookie 2012! For sure, TJJ heading back there in 2013. This was a really nice party. One thing must be mentioned...when the security asked for the music to be done right at 8pm... and the promoters did just that, a lady grabbed a run bottle and hey keys and started to rip it! And to add to the rhythm section...a man grabbed two "Fuze" plastic bottles and start to beat it on the stage....my laaawwdddd Talk about riddim!!! But we must big up Hector, Dark Water and the entire promotions team, and all the DJ's... great job! We had a time!

Joy Juice... Out And About!