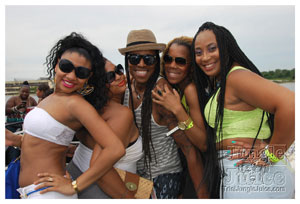 Once again we made the annual pilgrimage to Sheephead Bay at the crack of dawn for Silent AM.  It’s interesting how there was really no public advertisement for this years’ ride but yet still the boat was completely SOLD OUT.  I guess some events don’t need to be advertised anymore.  Silent Morning yuh large….

So we reach the pier and to describe the line as long was an understatement to say the least.  It took almost two hours for boarding to be complete but when that process was over we were ready to roll and like clockwork we were on the water by 10am.  Is now the boat start to wake up because mostly everyone had gotten their fill of breakfast being served on the lower deck.  Not sure what was on the menu but I’m sure it was a pretty decent selection judging from the long line I witnessed.

The all star line up that was on that boat took us back to the year Silent Morning went to the waters of Manhattan.  The year show tunes sent the entire boat in a frenzy and the same formula was replicated this year playing tunes like Sesame Street, Fresh Prince of Bel Air and Duck Tales.  This was so nostalgic it reminded us of our childhood days and missing these shows and it was a nice feeling to see the entire boat jamming to these songs; made them seem so new OMG we showing our age.

Freaks 4 Soca, Back to Basics, Natural Freaks, Dr Wax and Sounds 4 Life had that boat in a gear from start to finish.  There was only level winery and vibez on the boat.  After four hours on the water we started to head back to shore in anticipation of the first official after party for Silent Morning called Marooned.

Marooned was supposed to start immediately after the boat docked back but we all know that after 4 hours of drinking on a boat that was swanky we have to go home and start fresh.  Walking into Volume 2 had us wondering where we were going and what were we about to get into.  From the sand at the entrance, to the life preservers, palm trees, cabanas and mechanical surf board; yes I said a mechanical surfboard.  Well is now trouble start because all the heavy hitter djs and promoters had to take a turn on the surf board and it was quite interesting to see how many of them were brave enough to take the challenge.  Though it was a new concept, Marooned was a nice look and had a good vibe for its inaugural year and it will definitely get better as the years go by.  As it was announced, Marooned will be making an appearance in Trinidad for carnival 2K13 so I guess we will have to wait and see how that tops itself and create an identity all its own.

NYCV and Back to Basics, we had a ball and then some, can’t wait for Silent Morning and Marooned next year.