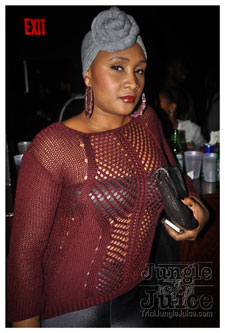 After an evening of eating our bellies full and lots of socializing with family and friends. We drove through the mist to the other side of Brooklyn for Risque. A name that exudes sexiness, sultry, and lots of vibes at the newest venue for a Shorblu Event, Jaguar 3.

Parking was not a problem, thanks to the accessible option of valet parking. Quick and easy. Amen! There was no line outside of the venue, and security was a breeze. We walked up two flights of stairs to a room of unfamiliar faces, drunk off their Thanksgiving dinner, but somewhat in the mood to just stand still. A few attendees peppered in seemed to be feeling the vibes, and the others engaged in cheerful chatter and bought rounds of drinks at the bar. One thing they all had in common, they seemed mesmerized by anyone that was daring enough to touched the stage to take a try at the stripper poles.

GBM Sounds, Pantrin Vibes and SLI definitely did their thing as usual. The variety of music definitely made a difference in the vibe, especially when they dropped tunes like “My Neck My Back” by Khia and “Back That Thang Up” by Juvenile. It was the twist that the fete needed.The hired dancers no longer became the main attraction. The female party goers really got the crowd going, and definitely made a quick buck as they’re fellow patrons made it rain dollar bills.

The bar area was definitely the place to go to chill out and avoid the commotion. There were also lots of couches around the venue to cop a spot and relax for the night. The bar was fully stocked with an abundance of drinks, but it wasn't ram with partygoers. It was pretty easy refilling the glass.

Many thanks to the guys of Shorblu for accommodating us each and every time.