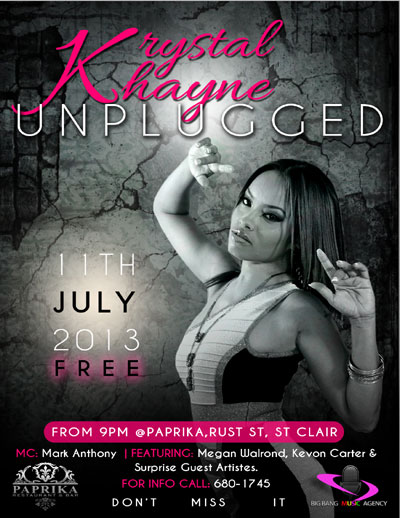 Port-of-Spain, Trinidad. July 8, 2013 -- The name Krystal Khayne has been making the rounds not just in Trinidad and Tobago but certainly across the region and internationally. Sun Pop Princess is just one of the sobriquets she’s acquired over the years but don’t you dare think for a second that Khayne falls short when it comes to delivering to any hardcore Soca- loving audience. In fact, she proved her worth as a Soca front-liner when she became part and parcel of well-known T&T band, Imij and Company. These days however, Krystal Khayne is flying solo- a move she explained was in the best interest of all involved as due to personal time constraints and moments of unavailability, her ability to dedicate herself completely to the band was hindered at times. Amazingly, Khayne’s solo status has already taken off as she’s now gearing up for a series of unplugged appearances in the weeks ahead.

Kick starting her musical showcase from Thursday, July 11th, Khayne says she’s extremely excited to draw her fans closer and earn herself a fleet of new supporters. The Paprika Restaurant and Lounge along Rust Street in St. Clair, Trinidad will welcome Khayne and her crowd with free admission to all from 9pm. The launch of Krystal Khayne Unplugged will also feature appearances by fellow entertainers Megan Walrond and Kevon Carter while Mark Anthony is set to host the event on Thursday.

Focused on creating a stir in the months ahead, the young entertainer whose fusion of pop, dance and soca rhythms has lent to her all round success, now looks excitedly to her next milestone. “Re-embarking on a solo career can be daunting to some but I look at this step as a path that will decide my musical destiny. I was a solo artiste before so it’s certainly not unfamiliar territory. Now, I have the advantage of understanding the pros and cons of being solo and working to suit,” she rationalized.

Khayne says this career milestone will be marked by the series of unplugged shows she has planned for the weeks ahead and still, amid that she is moving full speed ahead with the upcoming release of several new singles and videos. “I’ll also be working on some material for Carnival 2014 so folks can definitely look out for that as well. I’m just really excited about this new journey and I can’t wait to take my show on the road- to share my music with the world,” she said.

Khayne is readying herself to present nothing but the best on Thursday. She says she is, at the same time, working on the completion of a brand new album. Proudly, the diligent musical mind attests to pushing herself even when she feels she’s done all that she can. “That’s the only way I believe my accomplishments will truly matter. I have to push hard- that won’t change,” she said. For more information on the Krystal Khayne Unplugged summer series, call 781-0629 or 680-1745.