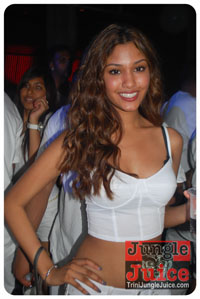 Caribana Friday at Glow fete was PUMPIN! From the line outside to the time I got inside was vibes. Everyone was enjoying themselves and the performances were full of energy!

CROWD:
This fete was full of mature and young adults. Everyone was stylish and had on at least one piece of white clothing. During the party, singer, Drupatee walked around and mingled with fans until her performance with Machel Montano.

VENUE/ACCESSIBILITY:
The location was at KoolHaus, safe area with lots of security around to guide people on where to park, etc. The size was great for the amount of people who showed up, the decoration and layout was exquisite!

VIBES:
The vibes were amazing! Full of energy and live performances by KRich, Machel Montano, Drupatee and K.I.

FOOD & DRINKS:
Drinks were not all inclusive, but there were many options ranging from $4-$8

SERVICE:
Everyone from the staff was friendly, even the security.

COST/VALUE:
Early Bird tickets were $40 then prices went up to $50, each dollar was worth it!!

My time at Glow fete was really fun, the vibes were amazing and so was the people. Something that I found extra special was, after the fete, there was corn soup and shark and bake selling outside, so Big Ups to the Corn Soup and Shark and Bake Man!