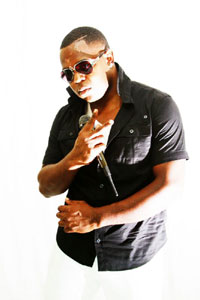 Port-of-Spain, Trinidad. November 11, 2013 -- Push the Soca Global. It’s been a sentiment expressed by Caribbean soca stars time and time again. These days however, the sentiment is being forcefully motivated by the efforts of one young entertainer who’s relatively unknown.

While many may wonder if NaldinYo’s passion to see this happen could in fact become reality, his ambition to persevere in this particular quest is quite extraordinary. Venezuelan roots and a real love for Soca music propels NaldinYo- real name, Claudio Jose Luces Smith, to be a revolutionary when it comes to the promotion of the musical genre, and sticking first to the Latin American arena, he’s out to prove that with the right mindset, Soca music can and will reach the Latin American market.

The artiste who prefers to be referred to as a Caribbean/Latin entertainer grew up with a lot of Trinbago influences around him. For starters, his mother, Trinidadian, Claudia Smith aka D’ Calypso Girl, was the winner of the first Calypso competition held in Ciudad Guyana, Venezuela. She was also the lead singer of the fusion band, The Uptights in Venezuela, which was formerly The Rockefeller Combos in Trinidad. NaldinYo’s father meanwhile, was the Owner/Musical Arranger of Steel Pan Guyana, a musical ensemble in Ciudad Guyana, Venezuela in the 1970’s that reveled in the music of Trinidad and Tobago, fusing the Trinbagonian culture with that of Venezuela. Taking a chapter out of his parents’ book, NaldinYo is on a path that’s much the same. He recently released a single in Trinidad called, ‘Baila en La Calle’- his first Latin/Soca single and one he plans to market in Venezuela from November 14th.

His vision is clear. NaldinYo wants to see a cross-cultural unity between his native Venezuela and his adopted home of Trinidad and Tobago. Culturally, the Latin community showcases, time and time again, a strong similarity to the Trinbagonian cultural engagement- all with the carnival delights, the music and even the food. A network called the Latin Connection in Trinidad and Tobago supports the vision of cultural exchange, cooperation and unity between the English speaking Caribbean and the Spanish speaking Americans so with that a motivational tool, this aspiring crossover artiste is moving full speed ahead.

‘Baila En La Calle’ – a fusion of Spanish and English lyrics, was written by NaldinYo and produced by Simon Mendoza. It’s catchy Latin flavour and the lyrics which speak of a carnival atmosphere, will likely encourage many in the Latin American community to look to T&T for the thrill of life they desire.