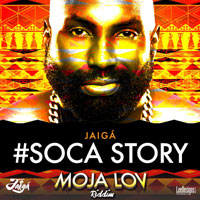 Last year we introduced the world to JAIGA, the evolution of a brand, concept and entertainer as he realized new beginnings personally and professionally. While some found it difficult to detach from the brands "TC" "Jigga" and "Superjigga TC" they had come to grow and love over the years, for the most part, it was a successful transition. As time progressed, people accepted it and realized it is the same friendly, jolly and creative entertainer simply rebranded. As we wind down 2014 and prepare for 2015 which has an extremely short Carnival season with lots of changes buzzing in the pipeline, Jaiga remains committed to playing his part with musical offerings and entertainment.

On November 8th he released his Soca Story, this was on the Moja Lov riddim produced by 1st Klase Records and Ground Empire Artiste, Revelation. It is very sound instrumentally mixed by Neel Dwala and guitars by Kiwan Landreth-Smith. Lyrically matched by Revelation and Jaiga TC in a collaborative effort as the concept and story line depicts an elder asking Jaiga why does he sing soca, being a seasoned radio announcer making it even harder for upcoming youths. Jaiga replies the very true story that soca just won't leave him alone, it keeps calling his name and it is in his blood and veins. This release has been well received with much airplay and positive reviews. 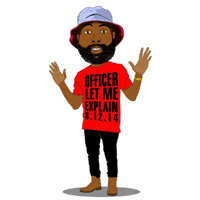 On Friday 5th December the plot thickens as he prepares to release Liquor, a catalyst to the Soca Story and a prelude to the much anticipated release of Officer on Monday 8th December, 2014. Liquor was produced by Akeem 'Preedy' Chance and Anson Soverall, music producer - Forward Movement Music Group (FMMG), Hitlab studio and member of Team Rosa. The culmination of the Soca Story will be the release of Officer. As a prelude, the insights of this release are as follows:-
* His first power soca release in over four (4) years.
* His attempts to explain to the officer what the Soca and Liquor does to him.

Apart from these top three in the mix, you can look forward to several other releases, some new and some recorded this year but held until the right time. The bookings have already begun rolling in as we prepare for a jam packed Carnival 2015. Music and bookings aside, you can also look forward to new concepts between Stag and their endorsees under the new brand management of Shehann Caruth, so look forward for more activity between the brands Jaiga and STAG- A Man’s Beer.