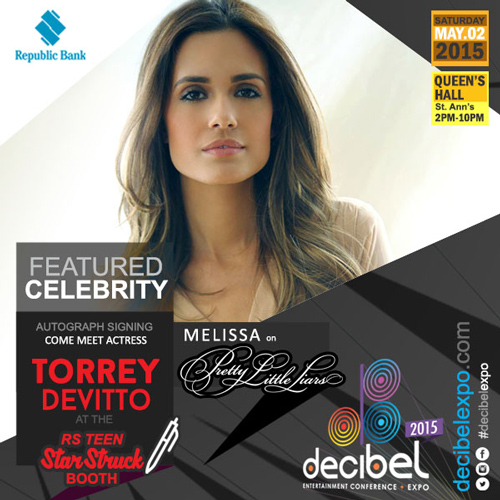 What does Pretty Little Liars, Vampire Diaries, One Tree Hill and Army Wives have in common? Think about it for a bit and let the thought of Torrey DeVitto coming to Trinidad and Tobago linger in your mind. It’s no longer just a thought, but now a reality. It has been confirmed that American actress and former fashion model Torrey DeVitto (also known as Melissa Hastings from the hit television ‘Pretty Little Liars’) will be a celebrity speaker at the Republic Bank Decibel Entertainment Conference and Expo. 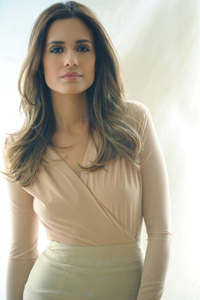 In their bid to continue to generate and encourage interest in the entertainment industry, organizers of the Republic Bank Decibel Entertainment Conference and Expo are paying specific attention to youth and industry professional development. Specific emphasis is being placed on Decibel’s goal to empower creativity and create networks for those interested in making entertainment a profession.

The Republic Bank Decibel Entertainment Conference and Expo runs from April 30th - May 02nd at Queen’s Hall, St. Anns and would feature a number of high profile speakers and exhibitors in the entertainment industry.

Originally launched in 2001, Decibel was the very first industry event in Trinidad & Tobago to focus on fostering growth in the music sector. By 2005, this event built quite a track record by having more than five thousand participants in attendance, plus it boasted over a hundred executives partaking in panel discussions and one-on-one networking sessions.

In 2014, Decibel was rebranded as the Republic Bank Decibel Entertainment Conference and Expo, and partnerships were forged in both the private and public sector to stage a rebirth of this festival event. Over the years we’ve had some major players in the entertainment industry participate and/or play a contributing role in DeciBel such as Shia LaBeouf, Carmen Electra, Kes, Anya Ayoung Chee, Pras, Kerwin Du Bois, Mark McGrath, Paul Guilfoyle, Adam Sevani, Rikki Jai and the cast of Disney’s Kickin’ It among others.

When we re-imagined DeciBel, we designed a model that would teach, entertain, educate, create networking opportunities and most importantly, give something back to those who need it the most. We are continuously striving to improve the DeciBel brand, and have a dedicated team working tirelessly to grow our event to international standards. Through our work with both the private and public sector our mission remains the same: to make DeciBel the entertainment hub for the entire Caribbean, and a global destination for enterprises involved in any of the related sectors throughout the world.