"I Owe It To My Kids." St. Vincent Soca Artiste Releases SkyFalls, Maintaining Commitment Made 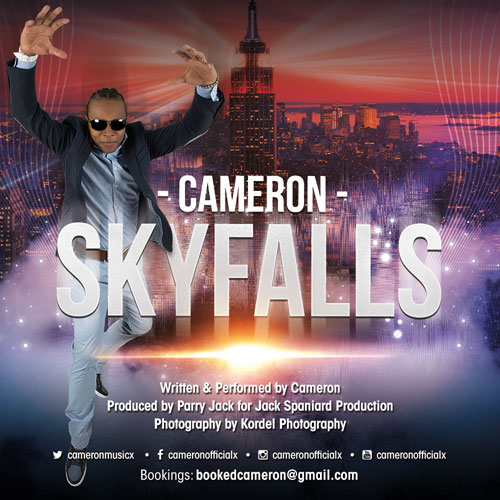 Port-of-Spain, Trinidad. May 12, 2015 -- Six years has passed since St. Vincent born soca artiste, Cameron made the decision to dedicate his ambitions in the music business, to his two children. Their mother had passed away in 2009 and it was then and there that he devoted his life to ensuring that his two young children received, through his example, the lesson that one should never give up on one’s dream. This year, in yet another bid to make it onto the mainstream music circuit in the Caribbean, Cameron has teamed up with music producer, Parry Jack of Jack Spaniard Productions, for something quite special. Dubbed, “Skyfalls”, Cameron says this track will leave all of the Caribbean, enthused.

A strong and unmistakable fusion of techno and soca beats immediately makes the song a club hopper’s delight but with lyrics that speak of the ideal feting atmosphere, “Skyfalls” is not to be underestimated. Cameron refuses to hold back and he certainly will not allow obstacles to stand in his way. “My journey will not end with any kind of disappointment.

Music is embedded in the fibre of my soul and my spirit. My two children are my motivation and they’re motivation enough,” he said confidently. With St. Vincent’s carnival celebration culminating on July 7th this year, the Vincy born artiste who is a marketing professional as well, is taking his music to every corner of the island but beyond that, he’s working hard to market his music to other carnival destinations with the hope that what he delivers time and time again, will be enjoyed by music lovers across the region. “Music should never be stifled. It shouldn’t be that one island or country’s music has to be played solely by that territory’s radio stations and listened to only by that country’s people,” said Cameron, adding that he feels music can transform lives and holding back the lyrics and melodies of artistes that could potentially deliver a message of happiness, joy and upliftment to people across the world, is irrational. He’s hoping that as social media bridges the gap between territories, more entertainers like him, could reach places and audiences never believed possible.

“Skyfalls” has already been released in St. Vincent and will likely receive the nod of approval from many. “It’s a catchy song. The vibe is on point and the melody can really move you. It’s that kind of song that will excite masqueraders and party lovers,” said the artiste.

He’s excited about what lies ahead. He’s eager to deliver and make good of his promise to his kids. “It’s all for them. I have to show them that nothing and no one can stop you once your heart and soul are into your dream, he explained. For now, as he continues his musical pursuits, Cameron is engaging supporters via social media. His social media channels are always delivering the latest on what he’s up to and he encourages music lovers to connect via Twitter @cameronmusicx, Instagram @ Cameronofficialx, Facebook – Cameronofficialx, via his Youtube Channel at CameronOfficialX and on soundcloud as well @cameronofficialx