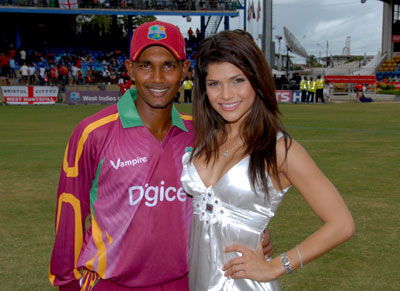 Sunday, March 15 – Queen's Park Oval, Port of Spain, Trinidad:  Trinidad, a country known for its beautiful women and Carnival beats, offered a cricketers and cricket fans a delightful treat on Sunday when they had Miss Trinidad & Tobago World 2008, Gabrielle Walcott participate in the opening coin toss of the Digicel Twenty20.

Gabrielle, who placed 2nd in the 2008 Miss World competition and was awarded the title: ‘Beauty with a Purpose’, is an advocate of youth participation in sports.

Gabrielle explains: “There is a sense of National pride to know that Windies have done so well this year and that the West Indies is known for more than our beaches.  The West Indies team is known around the world and I am happy that we are able to produce such talent in the Caribbean.

“I feel it is very important for our youth to be more active in sport which is a positive thing because more often than not they can find themselves getting wrapped up in the negative especially in areas where there is not much positive happening and crime is rampant.

“Sports in the Caribbean have proved to be an opportunity for many from impoverished areas and we as a people need to continue to support and invest in our regional sports.”

Gabrielle is an ambassador for the Just Because Foundation which provides practical and emotional support for parents and siblings of children with cancer.  Gabrielle also works along with Miss Trinidad & Tobago Universe Anya Ayoung-Chee with the TallMan Foundation, established for the empowerment of young people in underprivileged areas.