Hats off to Tony P. 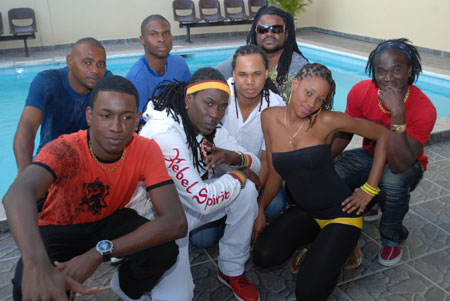 The sounds emanating from the lips of detractors, simmered and settled on April 16th, 2009, when, like a true emblem of local ambassadorial strength, Tony Prescott, walked onto the stage of Brian McFarlane’s Summit of the America’s presentation.

Selected, for his worth rather than his network, as some would want the masses to believe, Tony P, proved to be the right man for the job, singing with pride and true Caribbean class, the words to, “ All Aboard,” the hit song that has moved across the ocean, from island to island and aboard ocean liners that carry thousands to destinations around the Caribbean.

Many marveled at what they’d witnessed on Summit Friday, but to many others, it was nothing less that they’d expected, as for the true Tony Prescott fans, his music, his method and his presentation never falter. Performing for the 34 heads of states that arrived on local shores, Prescott moved to the beat of the melodic track that rhythmically worked hand in hand with McFarlane’s ‘Caribbean Sea,’ presentation, a symbolic segment that highlighted that which binds the nations of the Caribbean and assists in commerce and the disbursement of natural resources.

Along with some 800 other performers, inclusive of dancers and fellow entertainers, Prescott wowed his foreign audience, and even proved to be a favorite to promoters overseas who simply couldn’t wait for the chance to call for bookings. “ Since the presentation, I’ve gotten calls for shows in Canada, Tortola and Miami. And even folks from as far as France have called with anticipation for another show that includes me,” says Tony.

He is truly elated by this latest boost to the career that he has, for over a decade, worked diligently at shaping into what he wants it to be. Along with his band, Surface, Tony Prescott gave Carnival 2009 a run for its money, performing along with Brian McFarlane’s band in the presentation of Africa and bubbling from one great gig to another, with relentless momentum.

“ The last two shows for the Carnival season were probably most special to me. I performed in Tobago for Shurwayne Winchester’s children’s show where I was well received among the kids and that same weekend, the band headlined at a Beach party in Pigeon Point- those two were great.”

There’s been no signs of slowing down for this entertainer. From Christmas to Carnival, he maintains his focus and in a thoughtful moment, he says, “ The victory of being able to perform for the heads of states is not one for Tony P alone, but for everyone who made it work. From the artistes to the supporters, to the main man himself, Brian McFarlane- it was truly an all round effort that brought with it, true success.”

With a few tracks being prepared for release this coming summer, Tony P now steps into promoter mode as he launches his boat ride campaign, “The Voyage,” in the coming days. “I never let my guard down, there’s always some way to maintain productivity and by the grace of God, my productivity will bring with it, eternal results.”