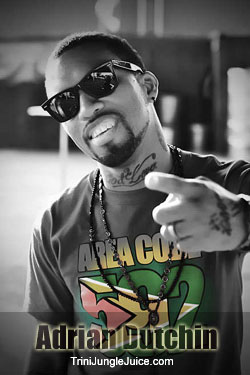 Born the first of six, Adrian Dutchin first appeared on the scene in 1998 as part of the group "Seven." He was the lead singer of the group for four years before venturing into music on his own, and was signed to Kross Kolor records by Burchmore Simon. Adrian continued to work on his music and eventually came out on top in several competitions in Guyana - the Road March, twice, and once with Chris Wilson for the song "Buxton Spice." He also made a name for himself in the Soca Monarch competition, winning three titles to-date.

After winning the Road March in 2006 Adrian became a member of "X2 (Times Two)". He recorded with Kross Kolor Records and he was subsequently drafted by renown Bajan band Krosfyah as one of their lead singers. Dutchin sees all this as his opportunity to work hard to "keep the flag flying."

Adrian has graced the shores of several countries, including the USA, England, Canada, St. Lucia, Antigua, Barbados, Grenada, St. Lucia, St. Vincent, Turks and Caicos, St. Maarten and St. Croix. He has performed with most of the big names in soca such as Rupee, Machel Montano, Alison Hinds, Edwin Yearwood, Peter Ram, Destra, Shurwayne Winchester and Iwer George. He has also worked with people such as Jumo Primo of Byron Lee's Dragonaires, Terry Gadraj and the Hit Man.

The proud father of one is currently working on his first really serious album called 'Finally', working with producers Shawn Noel, Darron Grant and Burchmore Simon.

"Coming from Guyana and being in music is a tough thing seeing that they are not that many people of music known around the world from Guyana," says Dutchin. "I'm always working on making my voice heard so people know there's a place called Guyana ... where quite a bit of music do come from!" 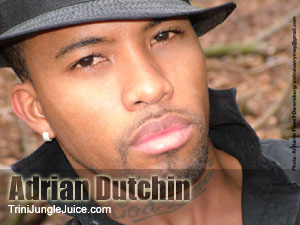 Real Player will be needed to experience the music