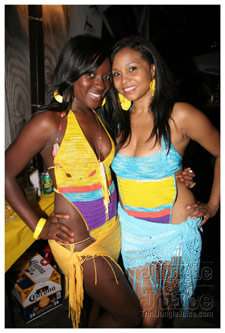 A huge shout out goes to W.I. People - Ayana & Pauline -  for doing a wickedly awesome job as well as the Iron men who kept it pumpin and the DJs on the ones and twos.

CROWD:
Women turned out rockin their swim suits and short shorts, men were dressed casually. At 7pm the dance wasn't pumpin and hyped up as yet ... 7:30 and they started rollin in with coolers in hand. The dance was packed by this time, but not too packed where you couldn't actually move without stepping on someones gladiator sandals and painted toes. The only thing that was bothersome was the fact that almost everyone bought a cooler stuffed with drinks and some of us being extremely clumsy, were afraid of tripping over those coolers and knockin some teeth out!

VIBE:
The music was off the hook and of course everyone having a blast whiles pulling out Johnny, Hennessy, Grey Goose and chasers from their coolers (just a few names). The DJs did an awesome job keeping people on their toes...literally. Pounding lovely beats on iron, the iron men delivered sounds which were enticing to the ear. Would we do another Maracas Cooler Fete?? Definitely!!

VENUE/ACCESSIBILITY:
It was easy access to the venue. We were thrilled to see that there weren't long lines trailing the streets of Brooklyn. From the seashells and starfish draping from barely visible lines to the projector screen which displayed coconut trees and waves crashing against the shore, both gave it a "beachy" feel.

FOOD & DRINKS:
Tempted to taste everything they had at the venue. Bake and shark was obviously starring, what's a beach party without bake and shark ? We have no clue! Oysters (trini style) was being served, mango chow, soaked pommcythere, saltfish buljol are some of the foods that were being served.

SERVICE:
Pretty darn skippy about everything! Everything was on point!

COST/VALUE:
Twenty five dollars ($25.00) was refreshing, considering that you brought your own drinks in your lil cooler. Totally worth it!!!