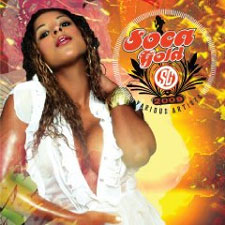 The Soca Gold 2009 (VP Records) compilation is rammed with classic tunes to make yuh roll yuh batty !!! Whether you made it to Trinidad carnival or maybe even any Caribbean carnival this year or not, Soca Gold could be on in yuh living room and you know yuh gonna get caught dancing like yuh on the big stage !!! Last year’s compilation debuted at the top the U.S. Billboard Reggae Chart for more than three weeks so soca Gold 2009 has big shoes to fill !!! This Soca Gold 2009 compilation features A LOT of big tunes from all over the Caribbean. If Crop Over is yuh thing and you are yearning to be back in Barbados again then you will be pleased to see the ‘People’s Monarch & Road March King of Barbados’ Edwin Yearwood! Not forgetting the other Islands and stars from each, we are also treated to  the ‘Road March King’ and ‘Soca Monarch Queen of St. Vincent’ Skinny Fabulous and Zoelah!!! If yuh head not bad from listening to these tunes trust me it's worth getting your hands on those two just to play this one over and over !!! Of course, the compilation would not be complete without Bunji Garlin (de girl dem darlin!!) and a little crossover into Jamaica with the ‘King of the Dancehall’ Beenie Man.

Whether you were there in the sunshine or just re-creating carnival in yuh house, this compilation will bring plenty memories for years to come. Let's start with the good stuff, the stuff we NEEDED on the album!!! I would say there are 14 out of the 18 pumping tracks that definitely won't have you reaching to change the CD or even the Fast forward option. Big tunes that will have you jumping up include Destra's 'Bacchanal', the outrageous hit from Roy Cape and Blaxx which had everyone 'Tusty' and my personal favourite from Skinny Fabulous 'Head Bad' . Also worth mentioning and serious vibes came from Jamesy P with 'Soca Daggering, Peter Ram's 'Tight' and 'Jepp Sting Nania' from Kes, Ravi B and Hunter !! That will have you practicing your chutney moves fuh sure !!!

Now if you have ever seen Lil Rick perform you wil go wild for 'Bashment Winners' and this could be left on repeat whether yuh out or yuh home. Lil Rick will always have you in that request line for the DJ! And let's just say that this big tune from Zoelah 'Wine Up On Me' is another fantastic track that will make you realise why yuh love soca !! If this was your first experience buying a soca Gold compilation, you definitely won't be disappointed, whether it's holiday vibes you bringing back or just some carnival Tabanca kicking in then Soca Gold has the remedy !!! Make sure you take in Red Plastic Bag's addition as well, with the hilarious 'Wrong Gal.'

For those dancehall fans out there, we get a special treat from the collaboration between Jamaica's dance hall King, Beenie Man and Trinidad's favourite Bunji Garlin with the catchy 'Plenty Gal'. A little disappointed to see that Bunji's Mrs ... the wonderful Faye-ann Lyons ... didn't make the album this year, especially seeing as her track 'Meet Superblue' was THE hit in Trinidad carnival and indeed Trinidad Carnival's Road March. It seems a little strange that if Trinidad is the home of Soca music not to have the Road March especially as Barbados and st Vincent's stars were featured !!!

As usual there were a few background tracks... they could be there, they could not be there, they not gonna make you buy the album but at the same time won't make you start skipping either !!  'Sexy Boo' from Trini Jacob, 'Put Some Wine On Me' from Rita Jones, 'She Sexy Now' from Sean Caruth and 'Carnival Again' from Biggie Irie are the kind of tunes that you won't hesitate taking that trip to the bar when they come on. Yuh batty might still be rolling, but it not rolling yuh onto the dance floor!!

All in all, there were only about 2 tracks that would have you idle and might make yuh waist stop rolling . Unfortunately KMC's 'Yeast' fell into this category... even though the boy doesn't usually disappoint!!

Overall, although missing some vital tracks , particularly from Trinidad carnival 2009 - like either of Zan's two groovy soca hits 'Slip Away' or 'Hold You Down', the album was mostly enjoyable and full of vibes to keep you moving! Check the bonus DVD included for seven companion music videos, a special "Best of Soca Gold" slide show and exclusive J’Ouvert Morning footage.

Elizabeth aka Posh Juice
The only thing constant is change