CD Review: It Is Crop Over 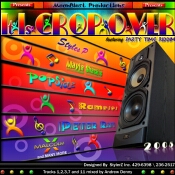 IT IS CROP OVER is the debut album of Moonblast Productions. Sebastian Legall who is only 22 years of age and from the small island of Barbados produced all tracks.

On this CD, listeners can find the very popular PARTY TIME RIDDIM (soca version of Fat Joe's - Lean Back), the riddim featured artists such Peter Ram, Popsicle and Rameses feat. Malcolm X + Stylez P with their smash hit titled GALS. Listeners can also find the very comical Christmas song by Popcicle (Bashment Christmas). Bashment Christmas is one of the most rotated Christmas songs in the island of Barbados. Soca Rebels (www.socarebels.com) a Swedish soca band can also be found on this CD with a nice Zouk flavored track. Ladies throughout world of Caribbean decent have taken a particular liken to Caribbean Queen by Popsicle, it has gained both the producer and singer a lot of Caribbean female fans. Rameses' Music and Popsicle's It Is Crop Over were also very successful tracks, which can be found on the album.

IT IS CROP OVER can be bought at:
http://www.socacds.com/superstore/album.php/products_id/30