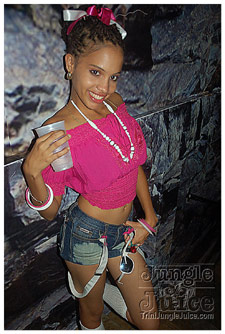 Well I'm sure U.W.I. students had a ball, they got a free shuttle to The Cave. Starr Struk did a good job right here and I hope TJJ will be more in their parties because it was pumping!!

CROWD:
The party actually sell off at one point no room to move. It was called the official short pants party and had a lil' competition but unfortunately the contestants were a lil stush but what you go do. Somebody won some money, if you were there that person could have been you!

VENUE/ACCESSIBILITY:
Well unfortunately they had some Chinese Association problems so they went The Cave. Now this is a tricky thing to judge. Quite frankly because of the size of the party The Cave was hot. It was Rrraaammm  pppaaaccckkkeeeddd!!! Plenty girls, guys existed too but again what can you do?? I wouldn't really choose The Cave as a venue though; but hey it was under short notice so I go give you a bligh there!!

VIBES:
Well yes plenty DJ's and plenty girls. In this party if you were bored it was entirely your fault. I'm sure men found plenty bottom to exercise on especially when they wearing a lovely short pants.

FOOD/DRINK:
Well it was The Cave bar. $13 for a Stag and that was all I took. You got some free doubles as well. 2 per person so everybody eat ah food during and after the party ... eat ah food ...

SERVICE:
Well the party was ram so it was hard to reach the Bar. People were in front the Bar so it was hard to order. Not the service guys fault but hey if you were in need of alcohol you might have had a lil' problem.

COST/VALUE:
Boss this party was cheap and if you didn't go you real brokes period. It would be definitely money well spent though. Less than $100 for a party is great in my eyes!!