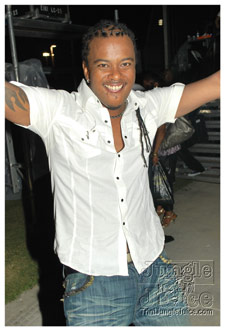 We have to thank the promotions for having us. The food was great big up the cooks. The few performances were good would we make it back next year? We'll get back to you guys on that one.

CROWD:
From what i heard last year there were thousands of people that attended this fete. This year wasn't anything close. I wonder why?

VENUE/ACCESSIBILITY:
This place was really far. We were on a road trip. Wen we finally arrived the place seemed pretty cool an well organized.

VIBES:
We arrived pretty early so the vibes were completly dead. There was harldy anybody there. Later on in the evening it picked up a bit but nothing to brag about. The live performances were definetly a hit. Sherwyn and his new band Y.O.U did an amazing job other performers included Tizzy and Sean "Mastermind" Noel. I'm not sure what went on but Bunji and his band was suchluded to perform an never did. on our way out if you here cuss. The most memorably line was "I pay $80 dollars for this S*it! I'm not sure what went on but the promoters have alot of explaining to do.

COST/VALUE:
Should I bother?? I'll leave this up to the patrons.

FOOD/DRINK:
It's an all inclusive so drinks an food was supposed to be none stop. well not for media since we wasn't allowed to have any alcholocic beverages we're still thankfull we got soda an water it's better than nothing. When Text-a-holic Juice and Famous Juice work together it's usually a recipe for disaster because we have bionic ears. We over heard some man cussing that he now reach an they say the bar was closed. This was at 10pm an the fete is supposed to go on untill 12. humm explain that?