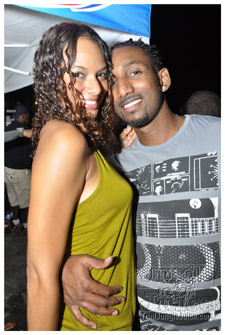 Welcome to Fetalotathon 2010.  We touch down in Piarco with one thing on our minds, Flight Cruise Cooler Fete.  If yuh never make a flight cruise boat ride well yuh miss out, because it get so big they move it to land now.   So a few libations later and a freshen up, and before you know it we linking up with the rest of the TJJ crew who doing it hard for a couple weeks now.  From the outside the bumsiage factor looks pretty promising.  Let's head in and see what the boat ride, turned cooler fete has to offer.

DJ Spice had the crowd warming up nicely and the vibes were building.  The place cudda use a little sweep up, but it’s my job to notice things like that and with the numerous amount of patrons (eye candy inclusive), I’m pretty sure I was the only one to notice J.  Perfect weather for a cooler fete, a cloudless night with a cool Caribbean sea breeze rustling through the coconut trees.  Umba on the mic now, with his DJ and while most appreciated the increase in energy, some were not accustomed to the heaving talking synonymous with reggae.

Speaking about reggae, Trevlyn and Die Hard decided to go totally go out the box and drop a reggae set in the dance.  Ah feel like ah was in Crop Over yes.  I don’t remember hearing a full reggae set (new reggae) in a carnival fete in Trinidad, ever.  The crowd was definitely moved, and to a man, hands were in the air.  To take matters even further outside the box, they then went into RnB and the dance mash up same speed “I got a feeling.....”.  Definitely one of the highlights of the night,  but the mic man kept complaining about some internal DJ politics that I guess was unfolding nearing the end of their set.  I wudda keep the internal politics internal.

Another highlight of the night was the JW and Blaze performance. The buzz around town is that they are in contention for Road March with their smash hit "Palance".  Having their roots in comedy, they incorporated some laughs into their performance doing some comic remixes of some popular songs that was also well received by the crowd.  Not sure that they ended their set with the same hype that they start with though, but still definitely a high point for the night.

Dr. Jay out of Tdot also did his thing and Back To Basics with Kerry The Dummer represented well for NYC, although from where I was standing, Kerry was a lil' behind the beat for most of the set.  Not sure who the second performer was coming down to the end of the night but aaamm...  right nice. Jamesy P also pass thru.

So we off to a good start with this one, and I’m sure this one will be on the must-do event list for next year.  Special thanks to the Flight Cruise Entertainment crew for having us and we’ll definitely see you guys again next year!

Wados the Party appraiser for the TJJ Fam