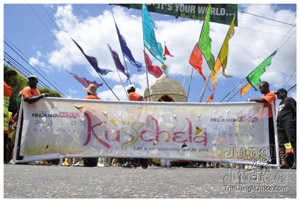 ISLANDPeople mas presents its 2010 concoction for the Trinidad Carnival entitled "Kutchela" and for this carnival monday, this special carnival monday - I was expecting to see every ISLANDPeople masquerader in half of their costume ... uhmm ... I was wrong! ISLANDPeople gave their patrons jerseys (males) and like a long beach wrap (females) ... this was unbelievable ... eccentric and sexy ... but unbelievable! So imagine just a sea of yellow just coming at you because everyone is in the same colour and in similar wear. Now with music provided by Alicia D Duchess, Mad Man Barry, Studio Guyz & DJ Spice just to name a few, the vibe on the road this year was just strictly disgusting! It was strictly unbelievable! It was fabulous ... it makes you think about nothing else except wining and jirating on the road, on anything, on anybody, with anybody ... ah mean ... just stand up and wine either way!Lets not forget the people who like to split on the road! Its Carnival 2010 and anything goes ... sometimes maybe because I am foreign based I really forget how much Trinidadians really enjoy themselves around Carnival Time or even when soca is playing ... Unbelievable ... Only In Trinidad.

The Bits To Miss 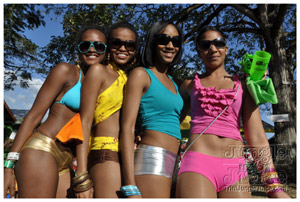