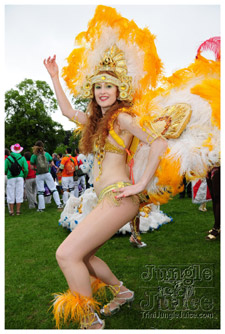 Last year we said we'd back and here we are!!!  We also told you Luton Carnival was growing in size every year and this year proved our point!!!! The more we explore the more Europe seems to be packed with pockets of great little carnivals in nearly every city or town throughout the year, but yet Luton remains Britain’s biggest one-day Carnival. (Luton, Bedfordshire is within travelling distance from London and comes with excellent round the clock transport links so no excuse!)

The roots of Luton carnival lie not just in the Caribbean but this one day carnival is also heavily associated with Brazil, Asia, Africa and most importantly the local community. This year they have come back with more bands, more money raised and more people to entertain. UKCCA (UK Centre for Carnival Arts) seemed so focused on making Carnival arts a major part of Modern British culture that now you can even get a degree!! Well boy in the name of higher education today we are off to study hard!!!

It's the Spring Bank holiday and although the sun usually makes an appearance this year the weather seriously lets us down so we are on serious mission to get ourselves warm somehow, anyhow!!!

The Carnival kicked off at 12.30 with Wardown park being the central place to meet and decide on your plan of action for the day. You could choose from staying in the park and being entertained by the likes of Tippa Irie on the stage or getting involved in the Samba to start with the lovely girls from Paraiso School of Samba!!! Aye Papi! The Parade was our choice of warm up activity and like last year consisted of over 40 different groups of schools, charities, mas bands and societies. If yuh after Caribbean vibes then definitely Masquerade 2000 or Rampage were the bands to be in. Now we say band but actually they are more like sections made up of around 20 people! Still you'd be amazed how much vibes you can create with just a few wild ones!!!

This year we at least had a rough idea of where we were heading and as per last year you could easily get side tracked walking through the town! The town seemed to come alive in the spirit of carnival with salsa dancers, jazz singers, sound systems and pubs with speakers outside pumping everything from Nigel and Marvin to Earth Wind and Fire!!!

We were actually pretty early (arriving just after 11am) and that gave us a chance to check out the Samba ladies as well as the steelpan blasting from the big stage. By 12.30 pretty much everything was underway and the park was packed with families, groups of friends and masqueraders ready for all the bands to pull off at around 1.30pm.

What strikes you at Luton is the diversity of this Carnival. Where else can you get Hare Krishna performing right next to The Ghana Society, see Elvis wannabes dancing to Steel Pan and learn some Capoeira skills on route !!! That's not all though, be prepared for naughty school girls, fire Breathing dancers, Vincy sounds and Masquerading primary schools!! Although small, this is truly a cultural event with something for everyone. As usual it was the girls from Paraiso School of Samba that were catching everyone's attention! Aye Aye Aye. The pictures say it all!!!

A couple of hours in and the parade is done, so we are hoping that as it grows the route gets longer and longer with more and more bands to keep us going well into the evening. Some of us here from TJJ UK would be happy with just more Samba girls in skimpy outfits let's be honest!

It's not the kind of carnival with food or drink on the road, so thank the Lord for the UKCCA After party !! The park was full of a variety of food and drink stands, most of which have long lines as did any fast food joints on our walk back. Our advice if yuh coming next year is eat before yuh come or walk with yuh own food in the trunk because the lines are long and after the afternoon jamming with no break, you will be hungry!!

Luton 2010 was again short and sweet. The parade is definitely the most fun and vibrant part of this event and the stage at Wardown park provided relaxed entertainment in the Park. There was another stage along the route a 'Young People's performance stage' which seemed to be appealing to the youths in town ... mainly all of the youths in town.

Once again we would like to extend a HUGE thanks to the UKCCA crew for their help, hospitality and hard work in pulling this together and making Luton carnival a small yet fun and culturally diverse way to bring in the sunshine!!!

Posh Juice
The Only Thing Constant Is Change