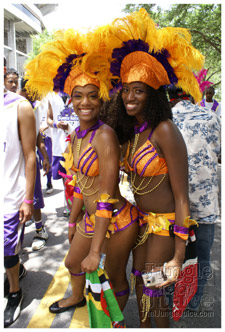 It was all about the Orlando Carnival O.C.A Fire for 2010! This year's Orlando Carnival hosted a live concert featuring Black Stalin, Tigress, Leon Coldero, Rikki Jai and The Roy Cape All Stars with Blaxx, Olatunji & Rita Jones. This Caribbean Carnival also showcased Indian dancers, tassa, steel pan and not forgetting the DJs playing Soca, Calypso, Reggae and Chutney all day.

CROWD:
Rain or sun was not going to shun masqueraders off the road. The bands (Island Fantasy, Go Sexy Camo, BIC Sounds and much more) paraded their creations of spectacular costumes and headpieces, sexy camo attire, and other creative designs displaying band leaders' visions for 2010. The crowd watched as the lineup of bands ramble throughout downtown, and as the bands hit the stage, 2k10 Soca hit "Palance" plays for each section to cross the stage.

VENUE/ACCESSIBILITY:
The Carnival takes place at the Festival Field @ The Citrus Bowl, Downtown Orlando. There is plenty of parking surrounding the park.

VIBE:
Mad Man Smallie, Wassy, DJ Tobago & Kemis and Island Beat kept the vibes pumping early o'clock. But as time went on, the crowd grew a little inpatient waiting for the concert to start. The masqueraders wanted to hear soca pumping continuously in their veins, no time for a dead pulse! Finally the show began and everyone were in their glee.

While the crowd was waiting I caught up with Chutney star Rikki Jai...

SG: Right now your big hit is "Barman". How did the song come about?
RJ: Barman is a true story. I used to work in a bar, actually which was my sister. Every night guys would come in and ask for Puncheon. When I decided to write a song with alcohol in it, I just thought it was a nice catch phrase. There is a lot of truth behind the song.

SG: What new for you? Any collaborations?
RJ: Not doing too much collaborations. I have a new song coming out between now and August. Getting ready for Carnival 2k11. I have about 4-5 Chutney Soca songs coming out, and a popular Soca song as well.

SG: What's stirring in your creative mind?
RJ: Reality stirs up my creativity.

SG: On Barman, when were you working in a bar?
RJ: I was working in that bar in 1996. Like most writers I have a catalog of ideas of songs and write little notes from my life. When you're in mood to write you can go back to your catalog of ideas and little notes and you pull from that.  A song is timeless, so you can bring it out at anytime. Once it's good and has good catch phrase and people like it, you're on.

SG: People watch your Barman video and think Guinness, vitamins... they think of energy, because your wife she wants it... wants it... and you're always at the bar.
RJ: Laughing ... Yeah, I'm at the bar. Hanging out with my friends, she calling for me to go home, but before I go home, I must put some energy in my system, first the Chinese ginseng, then Guinness, lastly ... and you know what Puncheon does? When you put all those together, it's a lethal potion!

SG: How do you feel about the first lady being elected in Trinidad and Tobago?
RJ: I think it is a positive step in the right direction. A great step for a woman over the world, a woman becoming a leader of a country. A really great step for the people of Trinidad & Tobago. I really hope the people partnership can really deliver to the people of Trinidad & Tobago and make sure of what our country used to be a safe society for one and all.

SG: What would you like your fans to know about you?
RJ: Wow, nothing much change with Rikki Jai... still same guy from twenty years ago, and hopefully to be the same guy twenty years from now. I am fun loving, easy going and nice to deal with.

Onto Mr. Blaxx of the Roy Cape family...

SG:  Hello Blaxx. Long time no see ... since last year carnival in West Palm Beach actually. I still listen to your music and love 2010 "Hunting" and "Zombie".
Blaxx: Hello! Yes, I do remember you from WPB carnival. Thank you.

SG: I must say I love your song "Zombie". It has this theatrical creative theme... I can just imagine it for carnival. Would you like to work with Brian MacFarlane?
Blaxx: Zombie has all the elements. Zombie is a story (he sings the first few lines). Well we contacted Mr. MacFarlane to do the production for Soca Monarch this year, but he was not available. He was busy (with his mas band), so hoping next year we can work together. A lot of my songs have creativity, but hopefully someone with a creative mind, like Mr. MacFarlane, will be able to work with my songs.

SG: When I listen to Zombie I can see the song turning into a movie like production. I just can't help and think of Michael Jackson when he did Thriller. Your next tune "Hunting" is so original and wicked on the fete and road scene. Would you like the same for mas on the road?
Blaxx: Yes, I have some ideas for carnival.

SG: How do you feel about the first lady being elected in Trinidad and Tobago?
Blaxx:  I think it is great. Trinidad is ready for change.

SG: What is something you would like your fans to know about you that they don't know?
Blaxx: I got married in December 2009 on Boxing Day last year. And I have three beautiful children.

SG: Congratulations and thank you.
Blaxx: You're welcome baby, anytime.

FOOD & DRINKS:
I must give shout out to D’Hut on the DOUBLES w/ slight pepper!! Yes, they are good.  Had first one, you know ... trying to watch figure... lol... went back for another. The line up was long for doubles.  Bake & Saltfish ...  DELICIOUS!!!  Vendors were serving all your favorite West Indian dishes and tropical juices. I did enter this cake raffle contest, um ... never received a call. Good Luck to whoever won!

SERVICE:
The security kept the festivities nice and safe.  Orlando Carnival Association (O.C.A) was courteous to their patrons (and TJJ).

COST/VALUE:
An entrance fee of $10.00 with the entertainment provided well exceeded the cost.

Sending love to the Orlando Carnival Association, DJs, masqueraders and you ... the fans from TJJ! Thank you.