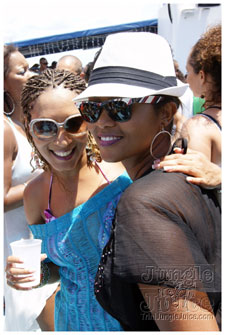 CROWD:
Oh mama ... quality, quality ... and more quality. Looking at the women on board could have set your imagination wild, as the majority were wearing swimsuits which were slightly camouflaged by shorts, wraps, short transparent dresses and other beach wear. Well this was Booze Cruise so you know trendy and sexy goes without saying ... just take a look at the pics to see what we talking about. Loads of sexy smiles complimented by designer shades ... ha ha!

VENUE/ACCESSIBILITY:
The initial gathering took place at the Boatyard which is located on the outskirts of Bridgetown. This beach bar and night club sits along the shoreline of Carlisle Bay where one can find white sandy beaches and tranquil crystal clear waters. A sight to behold just by itself. Later on the real action moves on board the MV Harbour Master. A three level boat where music, drinks, food and people all combine to create an atmosphere like no other.

VIBES:
The day opened with brilliant Caribbean sunshine which lasted the whole day through. So now picture soaking in this sun while sailing in the clear blue waters, drinks in hand and sweet soca ringing in your ears. That alone sets the mood for pure vibes, but you see when the DJ buss tunes such as "Go Down", "Happy Feet" and "Duracell" it was like giving the crowd a shot of adrenaline. Live performances by Rupee and Mr. Dale respectively also added to the entertainment and excitement that makes Booze Cruise ... Booze Cruise! If you think that was all, think again. After the cruise, the Boatyard became the venue for the after party where more live performances were instored for patrons. 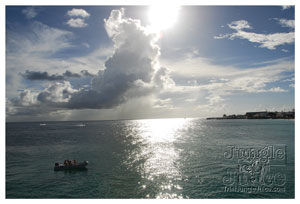 FOOD/DRINKS:
At the Boatyard before patrons boarded the boat, breakfast of bake n' shark, coconut water and snocones were all available. Upon boarding the boat there was a wide variety of drinks offered, but the preferred selections were Mr. Johnnie Walker, the ever popular Rum Punch, Vodka and Rum. It was an all inclusive affair so folks could have drank to their hearth's content ... and yes the bar stood up to the challenge! Always a commendable occurrence at an all inclusive ... well at least TJJ say so! There were also large coolers stationed around the boat where patrons could have gotten chaser such as red bull, power aid and water without having to hit the bars, cutting back on the waiting period to get your drink replenished :-)  In terms of food, when the lunch bell sounded patrons were opened to buffet style lunch. The lunch menu ranged from your choice of meat (Steak, Chicken or Fish) to mixed rice, macaroni pie, sweet corn and fresh garden salad, all prepared, cooked and served on board the MV Harbour Master.

SERVICE:
As far as the service goes, there are really no complaints. Everything ran smoothly ... drinks kept flowing, food was plentiful and tasty, staff was pleasant and entertainment was non stop. Who could complain??!!