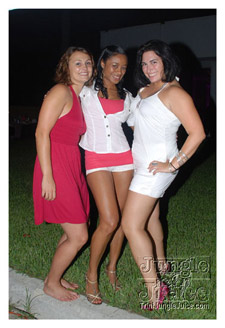 One noticeable addition to the event this year was that it had become a charity event to benefit the Susan G. Komen for the Cure foundation, who are dedicated to research for a cure for breast cancer.  There was ladies on hand from the foundation handing out materials and attendees were encouraged to sign up and participate in the Race for the Cure taking place about a month after the party, we should be sober by then
One of the surprises on the night, even for the promoters with non other than Hypa Hoppa of 96.7 Red FM straight out of Trinidad and Tobago was in attendance and it seems like he was feeling the vibes because next thing we knew he was on the mic entertaining the most appreciative crowd as he as selecting tune after tune and DJ House Arrest was bussing the tracks, no wonder nobody wanted to leave...cant wait for 2010

CROWD:
Talk bout eye candy, and not just because everybody was dressed in pink and white, but there was x amout of eye candy in this dance.  The creame de la creame of South Florida's social elite were out in full force.  There was a cross section of islands represented as well with quite a few Bajans and Jamaicans in attendace, making for a nice mix not seen at any other event for the summer.

VENUE/ACCESSIBILITY:
Even though it was the 2nd year of this event and most folks knew where it was, attempts were still made to keep it relatively secret.  Hence the very select crowd in attendance.  All we can say it’s down by Ft Lauderdale beach and its outdoors during the day and evening, and then indoors at night falls which just helps to turn up the tempo for the final stretch.  There is onsite parking for those who arrive early enough or prepay for parking, otherwise there is beach parking on the street.

VIBES:
Let’s put it this way, when the lights on in the dance, and the cleanup crew have to weave their way through people because nobody don’t want to go home and it’s still mas in the place.  What more can I really say bout the vibe?  As we mentioned earlier this party moves indoors after night falls and with everybody well sauced up and now closer together, things does just get out of control, with the likes of Peter T, Niko Star, Crown Prince, House Arrest and CIDee Sound on the turn tables...talk bout jamishness!!!

FOOD/DRINK:
It’s a Cooler Fete, so you drink what you bring or you drink what somebody else brings in their cooler if you walk with your hands swinging. The latter is only recommended if you are a hot chick.  There was food on sale, Doubles and Bake and Shark, Paleau, Fried Fish and Jerk Chicken.  With the amount of drinking taking place eat is very advisable.
SERVICE
:
We found the service at our cooler to be top notch, though cranberry juice ran out, we wont hold that against the promoters.  There was a bar inside for those who didn’t bring a cooler (why would you not??) and the food vendors were polite and friendly.

COST/VALUE:
At $25 presold and never having to stand at a bar one time, you cant ask for much more.