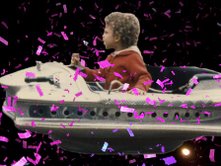 I recently had a conversation with a MAD Caramel Man regarding confetti.  Now, if you are West Indian, I know that a big smile just came across your face because we all get far too excited over the mere mention of confetti (there goes that smile again).
My friend and I were just remarking about how excited we get when there is confetti at a fete.  Party could be dead and lifeless but once that confetti comes out, lawd watch out!  West Indian hands in d air, screaming, all kinda ting!  Why do we react this way?  What makes these bright pieces of colored paper so mesmerizing?  Is it because we are already drunk on Rum and Scotch and anything will amuse us?
Case and point, I was at a fete in Trini last year Carnival and Machel was performing...Now, for those whinin criminals who don't know, if you go to a Machel fete in Trini during Carnival, yuh know there is bound to be some confetti shot out of something before the performance done.  Well, man perform, sing all kinda ting and all of a sudden, the fireworks started and everyone held their breath because they knew confetti comin...people were already cheering, crowd didn't need to get anymore excited when BLAM! Confetti came out in full force and everyone started going about 1000% crazier. This is known as the ICS or "Infectious Confetti Syndrome".  People grabbing each other, gettin on so, and smiling so big you would think it was New Year's in Time Square.  I even saw one big belly man rip off his shirt.
All I have to say to this is...wha...d...*ss?  Do we get excited about confetti because it is the closest thing the Caribbean has to snow?  Little paper snowflakes in the air dropping to the ground forming mountains of multicolored goodness.  I know I get all smiley when I see snow (When it first falls! No one likes that crap when it gets all nasty grey when steupidies walk on it and ting) in all it's beautiful cold glory but I don't jump up and whine on the first person I see.  You get the idea.
Now I know what you're thinking and yes, I am not exempted from the Confetti Craziness. My red bam has been seen on more than one occassion jumping up on some fella as soon as the confetti pop out and gettin on so bad that I'm really happy you all don't know who I am because I would be 'fraid if I was you..Making eye contact with me during ah fete at this precise moment would result in me pushin bumpa so hard, you would run away.
So the next time yuh in a fete, pay close attention to the people around you. I guarantee you will see this phenomenon and you will get sucked in.  Doh make eye contact though, you might get a smallie like me whinin on yuh!
-Mad Red Woman