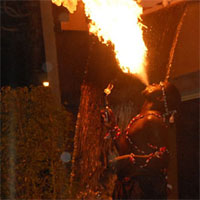 October 29th 2008 - Trinidad & Tobago:- As the clock struck eight pm on Friday night in uptown Port of Spain, there seemed to be something unusual amiss. Fire breathers filled the sky with a warm glow ... signalling the launch of something excitingly different and new. As members of all the major media houses made their way across the glitter-covered walkway to the moat-styled wooden doors of the Alchemy Nightclub and Lounge ... expectations were high.

A wooden staircase led to an elegantly appointed lounge where svelte ladies from the Brydens Baileys team welcomed guests with smiles and samples. This glass-enclosed area allows for a spectacular view of twin waterfalls flowing into an Asian styled private garden; smooth white stones, flowerpots and delicately placed fairies that line the pool’s edge. This was merely an introduction into the effort, and attention to detail put into the design of the new club. In every little angled corner lies another conversation piece to be discovered, tastefully done with an expert sense of placement and lighting.

From the lounge to the main dance area, Italian styled busts emerge from the wall above gilt framed Celtic mirrors, separated by moulded columns. Beautifully hung drapes soften and add mystery to a dance floor that is sultry and inviting. A spiral staircase up to the metal banister balcony of the Disc Jockey who filled the night with a crisp eclectic mix, from Steel Pulse to Chris Brown. Guests mingled as ethereal light effects swept over their faces creating an enchanting ambience. The Alchemy Management were out to impress with premium bars and a sumptuous buffet spread, consisting of fruit and gourmet cheese creations, alongside stuffed mushrooms, shrimp, chicken bits and shark bites.

The formalities started with a beautiful rendition of the National Anthem performed by Leah Skeete. Jean-Paul Pouchet, General Manager of Alchemy, thanked all the media and guests for their support. He shared that the inspiration for the club’s name came from the age-old tradition of Alchemists who dedicated their lives to the discovery of transmutation, turning base metals into something more valuable. The Manager stated that the Strand Cinema where the club is now located (the old sign has been preserved), used to be one of the most popular in its glory days. Unfortunately, as a result of changes in the entertainment industry, the projection of movies ended at the Strand. For some time after, it was used as a performance venue for calypso artistes, known as Kaiso House.  Mr. Pouchet explained that the owners saw the potential in the building to be transformed into something beautiful, to restore the opulence of the Strand, and thus the Alchemy and its name came into being.

The rooftop terrace affords a dramatic change in ambience; all white plush seating areas and potted palms provide the perfect Caribbean chic setting. This is the Chardonnay and imported cigar section, where the view and starlit sky seem to give that person of interest a bit more mystery, and you, a greater desire to unravel it.

An after-party for specially invited guests followed the media launch and continued until the early hours of the morning. A well executed and organised launch of a club that promises to satisfy the demand for an evening of sophistication. The Alchemy Nightclub and Lounge opens to the public this Wednesday 29th October.

1 Response to "Media Launch Of The Alchemy Night Club & Lounge"