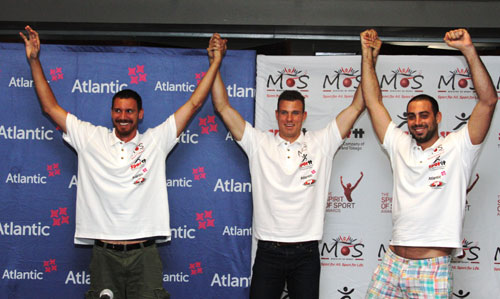 George Bovell, along with European swimmers Duje Draganja and Milorad Cavic, launched the 2014 edition of the Dive In Free Swim Clinics which begin today at 3:30pm at the Blue Dolphin Swimming Pool in St. Clair. The media conference was held Thursday at the VIP Lounge, Hasely Crawford Stadium.

Duje Draganja, who facilitated the 2013 Clinic, said he was excited to see how much the swimmers have grown and how they have applied what was taught in 2013, as the trio are expected to work with the same group of junior athletes. Duje said he is also looking forward to the interaction with coaches, and getting their feedback on the techniques which will be demonstrated.

First-time visitor Milorad Cavic, who is best known for his photo-finish with Michael Phelps and silver medal at the 2008 Beijing Olympics, said he loves to impart his extensive knowledge to children because ‘they are the future’. Milorad has his own swim clinic in Serbia and relishes the prospect of working with children and with coaches, who he hopes come with many questions. In addition to the coaches symposium on Friday morning, coaches are also allowed to sit in on the clinics to glean what they can about the dry land and in-water drills and techniques that will be applied.

George Bovell was high in praise of his peers who he called humble men who rose above physical challenges such as injury to recover and swim better than before. He said he hoped the clinics can inspire those youth who attend to dream big and raise the profile of swimming to be one of the top sports in the country. George also extended thanks to the sponsors of the three-day clinic – the Ministry of Sport and the Sports Company of Trinidad and Tobago.

Photo courtesy The Sports Company of Trinidad and Tobago