Was It The Reason For The Season? 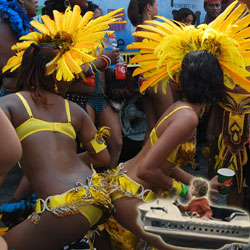 Carnival Tabanca has long come into the hearts of many revelers who were on the road for 2KWhine.  For some, solace comes in pictures posted on FB and for others a quick look at their tan lines from their costumes suffice.  For me....well I'm just MAD.  To me, Carnival this season lacked something...a certain vibe, a feeling, something just wasn't there.  Was the reason for the off vibe this season the economy all around the world?

It's not that fetes weren't packed or that liquor wasn't flowing, no that wasn't it...it was just a feeling. Fetes ended early.  Carnival Monday and Tuesday's jump ups ended early as well.  If I am going to spend close to two to three thousand US on Carnival, I expect to get my money's worth and honestly, this year, I didn't feel like I did.  I know it wasn't just me. Over 50% of the people I spoke with didn't feel as though this year brought the feeling and vibe of past Carnivals...Why?  Is it because of the fate of our economy?

The recession is taking a toll on all of us.  I know many people had to miss out on this year's festivities and sell their costumes, take out more Carnival loans than usual and cancel trips.  But is this really the reason?  For the first time in my short Carnival life span, I saw people walk out of a Machel performance....Machel!!! I had never seen that happen, from there I knew that something would be off.  Even lines at KFC weren't long as per usual and I got my usual KFCrack at an alarming speed (only took 15 minutes after I placed my order hehehe).  Often times I felt myself slipping into the Twilight Zone.  Would I wake up and be in the land of oil and music where pure bacchanal and jamishness would be present?

Am I alone here? What are you feeling? How was Carnival in your eyes... Discuss

1 Response to "Was It The Reason For The Season?"