Dark and Light and Lovely 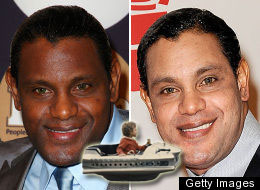 Baseball great Sammy Sosa is sporting a completely different look right now and it isn’t due to new flashy clothes or a new haircut, it’s a new skin tone.

When out and about at the Latin Grammy Awards, fans were shocked to see a brand new lighter Sammy on the red carpet.  When approached, Sammy said that he has been using a skin rejuvenation cream.  While he insists that he uses it to rejuvenate his skin due to years of playing in the hot sun, one has to wonder…is that the truth?  Is your face not covered by a baseball cap safe from the harsh rays of the sun while you were playing?  Were you not covered head to toe in your uniform?  The only exposed parts of you that I can see being argumentative is your neck and your one hand that didn’t have a mitt in.

“It’s a cream that I have, that I use to soften (my skin), but has bleached me some.  I’m not a racist, I live my life happily.”  No one called you a racist Sammy, we’re just questioning if you’re trying to be something you’re not.

If you are using this cream to rejuvenate your skin, well, what’s up with the green contacts?  Were you looking to give your eyes a break by shielding your brown beautiful ones from the sun?  I didn't know sunglasses were now available in contacts.

I get so MAD whenever I hear about whitening be it in Jamaica, America and even in China.  China has several whitening periods throughout the year to bleach bleach bleach their already fair complexion.  This isn’t common knowledge but known to the beauty industry.  Many companies get their top dollar from sales of whitening creams from Asia especially.  I keep hearing about grown folks even bleaching their childrens skin, kids!  When will we love the skin we're in?  Will that ever happen?  The great skin debate has been around forever and will continue to be around long after we're gone.

Skin color has been in the news alot, not only with Sammy Sosa but with movies as well.  I'm sure you've all heard about the movie, "Precious".  The director has been getting much criticism for casting dark skinned women as being "evil" or "downtrodden" and casting light skinned women as being "helping" and "kind".  I had this talk with a MAD cinnamon man, a good friend of mine, and he was very adament about this not being the case...then he took a step back and realized that the movie he was editing exhibited the same casting.  Would this be the case if there were more minority mainstream films?

Why do we not act this way when lighter skinned people tan?  Why are there not stories in the media about that?  Why is turning white bigger than turning black?

I recently went over to a friend's house to help her move and in the midst of stuff saw a lightening cream and my heart broke.  When will we appreciate who we are and stop trying to be something we're not.

I'll end my rant with this...watch the music video for “Mi Nah Rub” by Queen Ifrica.  It's really powerful, and provides an in depth glimpse into what people go through every day regarding this whole whitening lightening business... Be proud, be you.