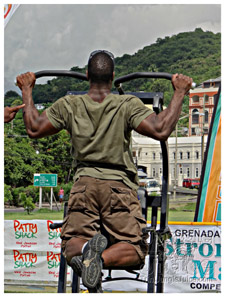 When word got out about a ‘Strong Man’ competition I instantly knew it would be an interesting Saturday afternoon, and the event most definitely delivered. It was a gorgeous day but the sun felt like it was taxing us.

Things got off to a slow start, crowd-wise but, because it was within walking distance of the Malls and Grand Anse beach, the spectators eventually began streaming in.

The DJ played all the usual hip-hop, soca and dancehall bangers. All edited, of course.  After all, it was a family-style crowd. Nonetheless, he did a great job of keeping it clean but not dropping the ball on the vibes. Can’t forget the free snack samples handed out by one of the sponsors, that was a nice touch. 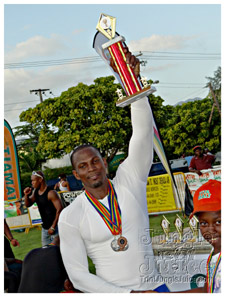 I must admit though, it’s been a while since I’ve felt this ‘unfit’ but I doubt I was the only one.  There were Three Grenadian finalist and One Trinidadian and man, did these Guys put on a show! From tossing around 600 pound tires pulling a 10 ton truck!

Dumbfounded onlookers were treated to the ultimate display of testosterone and the “ooh’s and ah’s” were testament. So much, infact that even though there was food and a well-stocked bar, the spectacle was simply too distracting to acknowledge hunger.

For the jealous and/or brave, there was even a spectator event (of which I didn’t partake). All-in-all it was a little bit different but in a good way; good music and a nice mellow, mixed crowd. TJJ’s definitely looking forward to another one of these.