When I tell you I’ve been waiting YEARS to finally have the opportunity to attend Spice Mas and experience Jab Jab – it’s like someone born on February 29th waiting for their birthday to roll back around so they can really go in. 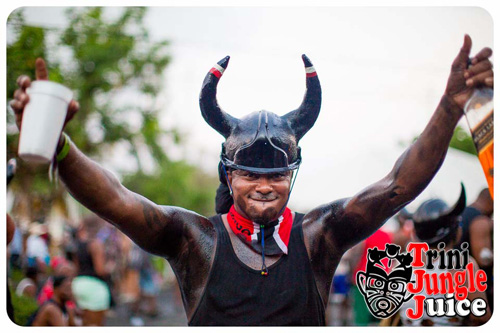 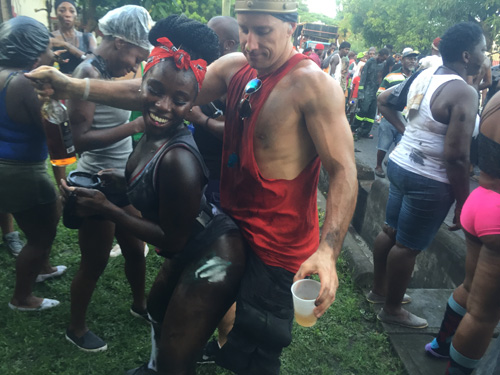 Jab Jab is life-changing.  What you think you’ve experienced, most likely some mixture of paint or powda, is like riding around on a tricycle and saying you’re ready for the Tour De France.  There is NOTHING quite like Jab Jab.  I mean, I’ll be the 1st to admit – it’s a bit strange that a white guy in general has the nickname Jouvert Mike, but to have never been to Jab Jab previously ...... there was a huge hole in my Carnival life that hadn’t been filled.  This had to happen.  It was essentially as if my 1st Jab Jab was my Confirmation or Bar Mitzvah for the world of J’Ouvert.  You just can’t claim to love, appreciate, and have a solid grasp of what it’s like without experiencing Jab Jab in person in all of its glory. 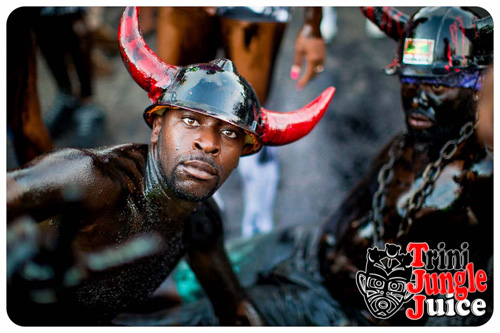 First & foremost – there are multiple Jab Jab – what most people think of is the big Jab Jab Monday morning in St. George, but there is also Tuesday morning Jab Jab’s out in the small country villages that should also be experienced (circle back for Part 5 of my series to hear more about that).

Waking up at 3 am in the morning, heading out in the streets.  There are plenty of trucks which reflect more of the common scene of on other islands giving out drinks to patrons who’ve paid for a drinks-inclusive experience, but there’s also thousands upon thousands of people coming out on their own – with their own style/outfit & a bottle of rum or JWB in their hand, pocket, or bag.

While on other islands the feeling and security around J’ouvert can feel intense and a bit ominous (like having police check points that require everyone to exit the car/maxi so they can inspect for contraband) ...... Grenada emanates positive vibes – Jab Jab belongs to Grenadians and NOTHING is going to take away from their cultural identity & celebration.  It’s as if they honor their forefathers by carrying on Jab Jab in a manner that will ensure its survivor and no one has to question safety – this is a Greenz Celebration.  My crew & I walked through the dark streets for hours in the wee early mornings trying to link with other friends and find a specific truck – not once did I feel anything but love, joy & celebration walking down back streets or the avenue. 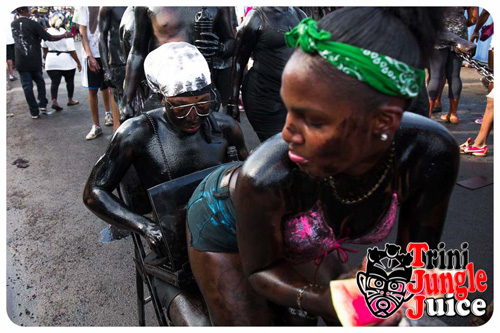 Once you reach the main strip there’s an endless number of revelers partaking in some of the most creative & hilarious social commentary filling the streets.  There are thousands of people with the traditional horned helmets, chains, covered in oil, soot, and/or molasses with fish or tentacles hanging from their mouths (now people use fake rubber fish, tentacles, or tongue extensions).  Beyond that you’ve got so many costumes mocking politicians, bureaucracy, etc. with signs hanging from people’s necks or stuck to their costumes – whether that be on their back, on a piece of empty luggage, shopping cart or wheelchair ...... essentially anything goes during Jab Jab. 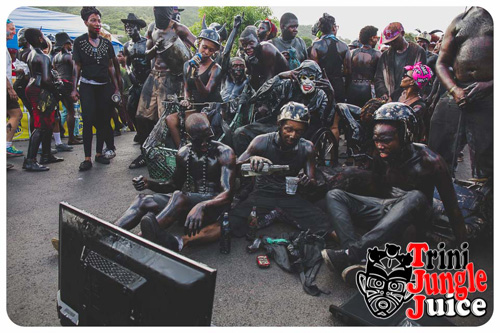 Watching people drag busted computers or tv’s along the road then all of a sudden set it up & plop it down in the middle of the street where 10-20 other people gather round “watching” the television while pouring glasses of rum or JWB is freaking hilarious.  To see the level of theatrics & spouting of lines in reaction to whichever politician they claim is broadcasting on the demolished tv is just amazingly funny.  All the while, the drums, horns, and other revelers walk around the gathering not disturbing the scene. 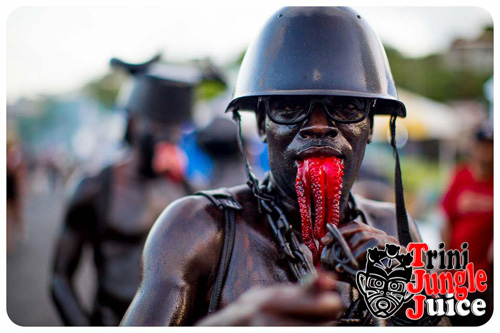 Yes, there’s plenty of wining, jumping, drinking, communal application of mud/oil/paint and paint like you’d anticipate at many J’Ouvert.  What’s interesting is that Jab Jab has some of the most intimidating costumes you’ll ever see, but people are so respectful & if you happen to have a camera it’s not that they will stop – they will gladly gather all their friends and put on a full shoot because they love to be on display. 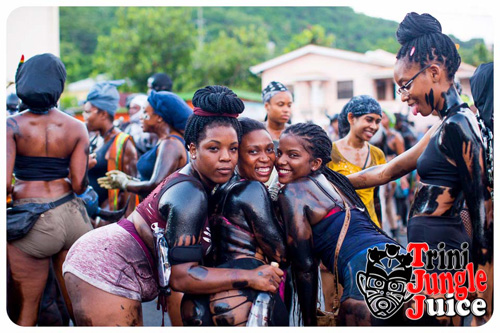 For those who go to lots of J’Ouvert’s you know to essentially never bring a good camera, or if you do – wrap it in plastic because the chances are someone is going to throw a lot of paint or mud and destroy it.  I wasn’t taking a chance & wanted to fully engage/enjoy in my first Jab Jab.  Having now been, I can safely say to my friends who are pro or amateur photographers – Jab Jab is probably one of the safest scenes to shoot because people aren’t throwing the oil/molasses wildly around, it’s being smeared on by hand.  As I’ve mentioned above – they are incredibly respectful and appreciative of the cameras that they give you ample space to do your thing & capture this truly unique scene. 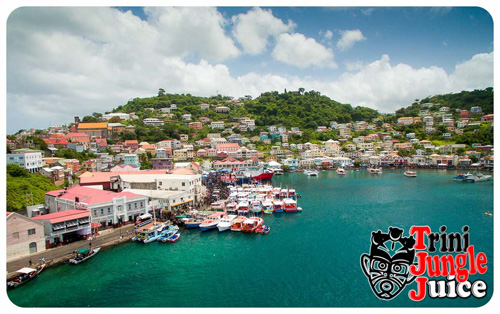 Jab Jab goes from early morning (3 am ish) right in to mid-day...... just as Trinidad has the marathon road march, not surprising at all Grenada has the marathon version of J’ouvert. This is something truly special & inter-generational.  Just as many will take their children or grandchildren out to watch pretty mas, or have children participate in their own kiddie carnival - Grenadians pass on the Jab Jab culture to future generations.  There were numerous younger revelers on the streets and really young ones on the side of the road with elders, occassionally allowed to chip in the road with a reveler for a few steps.  This was one of my favorite aspects of the day & while I typically give away my mas costume I also knew that in Grenada I would be giving away my Viking Helmet (clearly that's not a true Jab Jab helmet but I digress) to a young Jabber.  I found the perfect recipient - he couldn't have been more than 5 years old, he'd gotten other little items and gave them to his little sister while he smiled & danced joyfully.  This embodiment of the spirit of the culture deserved to be rewarded and he was more than happy to have a new piece to add to his Jab Jab celebrations.  The inter-generational & communal celebration doesn’t just happen on the streets, even when the road is done the comradery continues in the water....... 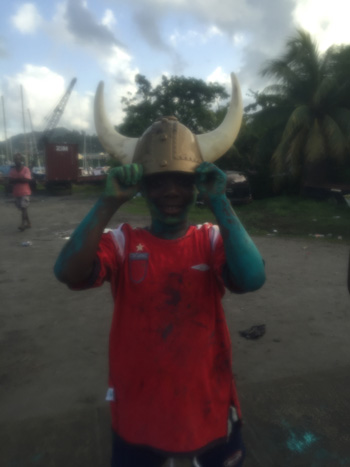 People often ask “is that really oil?” & “how do you get it off?”.  Well, yes many of the revelers truly are using a mixture of oil – some have chosen to now use paint but that’s a very tiny percentage & candidly I’m a fan of this island making sure it preserves its own unique traditional Jab Jab as much as possible.  As far as how do you get it OFF, well, part of that begins with what you do BEFORE you ever put it ON.  There are a few critical items you need to pack or purchase upon arrival for Spice Mas – Vaseline & Baby Oil are definitely on that list.  Lather yourself up good in Vaseline & Baby Oil before you ever head out to Jab Jab. I also brought a big shower brush because I’ve been down this road before and it aint easy – whether it’s paint, powda, or oil after 8+ hours on your skin it’s caked in there.

You MUST have Dishwashing Liquid Soap (i.e. “Dawn”) & a lot of it.  After I took a maxi back towards my villa (by the way I was already thoroughly excited about the fact that maxi’s would even let us in their vehicles considering what we were covered in) I stripped down and walked straight to the ocean.  I wasn’t the only one at Grand Anse or BBC Beach scrubbing down trying to get all of the nooks & crannies clean.  This is where even more laughter & communal support came in.  By the time I reached BBC Beach most were there just to lime in the water, not bathe and clean off from Jab Jab.  Being the only white guy in the water covered in oil plenty of locals had questions about what I thought of Jab Jab, did I like it, would I do it again (of course my answers were filled with “yes, yes, yes and my heart is now in Grenada") & thankfully an understanding motherly type took pity on the quality of cleaning I was doing on my back and so she thoroughly scrubbed me down with my brush.

Honestly, ending in the ocean with other revelers and even non-revelers who were nothing but welcoming & supportive (trust me ladies – 2 of my female friends were in heaven as they essentially had 3 male bathing attendants scrubbing down their extremities, so this isn’t some chauvinistic review here lol).  Everyone had a story, a favorite costume/antic that happened, and lyric after lyric was quoted.

Simply put, Jab Jab was nothing but Grenadian Love of Culture expressed in human form.  It is truly one of the most unique & life-changing experiences in the world of Caribbean Culture and should be added to everyone’s bucket list.

‘Til Next Time, Soca to de World
- Jouvert Mike

This article is part 4 of a 5 part series. Other articles in this series are shown below: