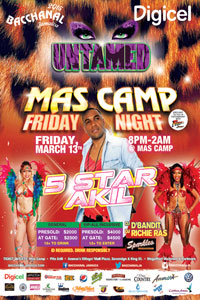 The man behind the 2013 hit song “Partier”, Trinidadian soca artiste Akil “5 Star” Borneo, will be taking the Mas Camp stage this Friday, 13 March 2015 when there will be a special discounted entry fee of $1,500.00. “We want to ensure that the party is open to all who want to enjoy the carnival vibe. Last week we had a 2 for 1 special and this week we are discounting our regular price by $500.00,” says Charmaine Franklin, Bacchanal Director.
Akil gained much of his musical experience during his 12-year engagement with the Associate Degree Sound System and their performances at the country’s (Trinidad and Tobago) top two nightclubs during that era. This formalised his path/journey into the entertainment world with the sobriquet “5 Star”. In 1998, he seized the chance to pursue his passion full time. Five Star Akil became a mainstream soca artist in 2013 with the release of his hit song “Partier”.

His destiny was mapped out early when at age six his father, a pannist, etched the art form into his psyche by exposing him to the national instrument. From that age on Borneo loved music, he tinkered and deconstructed musical apparatus and the work of artists, to understand the fundamentals and origins of that which enraptured him. He modelled his own career developing his own style by critically assessing and building on the foundation created by others in the music and entertainment fora.

A Canadian by birth, D’Bandit, is known as one of the best Caribbean DJs and promoters in Toronto and is credited with advancing Caribbean Culture in Toronto and worldwide. He brings a wide mix of musical experience to his craft including soca, reggae, hip hop, chutney and dancehall to the Mas Camp experience.  He is one of the bandleaders of Carnival Nationz in the Toronto-based Caribana festival. The band produced its first band of 600 masqueraders entitled “Dis is Paradise” in 2005 and created history by being the only band ever to capture the most coveted festival award “Band of the Year” in its inaugural year and copping four Band of the Year awards subsequently.

D’Bandit honed his musical skills in Grenada as a teenager when he worked in his family’s business in Grenada. This business included a night club which launched his career in the entertainment industry.

Charmaine Franklin noted that “it is our aim to present as a wide a mix of Caribbean artists to the Bacchanal Jamaica stage. Carnival and soca belongs to the Caribbean and we have to be inclusive. But, naturally, the glue that holds everything together is the Jamaican flavour which will be provided on Friday by our own Richie Ras.”