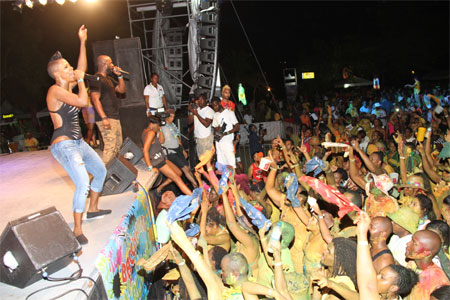 A kaleidoscope of green orange and yellow describes the thousands of patrons as they jumped, waved and gyrated to the powerful commands of Bunji Garlin and Fayann Lyons at Beach Jouvert last Saturday.  The event exceeded all expectations and marked an excellent start to what promises to be a fun-filled, exciting and event packed carnival week.   At 1:00 p.m. when the gates opened, anxious patrons were already waiting to get into the James Bond Beach, the home of Smirnoff-sponsored Beach Jouvert.

By 3:00 p.m. a highly pumped crowd had already gathered and began their wining, singing and “leh going” to the sounds of DJ Lee who started the party rocking. Nuphoric  from Trinidad, on their second visit to Jamaica in three weeks then took control of the music and treated the now huge crowd to oldies such as “Tay”, “Lay Lay”, “Footsteps” and more, mixed in with the popular 2014 music. DJ Smoke also took the reins for a musical set, while Bambino guided the evening through its activities. 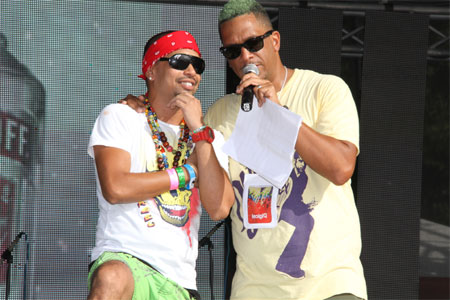 At about 5:00 p.m., the anxiously anticipated moment arrived and the paint emerged. Gradually individuals started appearing with shades of green, orange and yellow.  The inhibitions disappeared in direct relation to the amount of paint that was brought out and eventually the entire party erupted in a frenzy of colours with patrons becoming indistinguishable as they melded into copious designs and interesting shades of paint.  Beach Jouvert was now in full swing.

Patrons who did not want the paint experience were able to enjoy the mood of abandonment and sheer fun in a paint free zone.

When asked about the Jouvert concept and its relative importance to the carnival activities, director of Bacchanal, Michael Mc Morris shared, “Beach Jouvert is an original  innovation by Bacchanal Jamaica.  We took the traditional Jouvert experience of  “dirty mas”  and combined with Jamaica’s love for beach parties to create a unique and amazing event  which continues to pull people from all over the island .  Just as Jouvert is the official start of the carnival weekend , Beach Jouvert has become a  must do  at beginning of carnival week in Jamaica. 10 years after its birth we are seeing similar events  pop up in Trinidad and throughout the carribbean, its  a very compelling  "experience."

Of course tantamount to paint in creating the whole Beach Jouvert experience, was the adult play zone, courtesy of sponsors Smirnoff and Digicel. These games also embodied the spirit of letting go and  included activities such as the dunking game where patrons would try their skill at throwing a ball at a target which when hit caused someone to fall into a pool of water, the strength challenge where persons had to work their way across the monkey bars without falling into a pool of red syrup, there was also a water slide and a foam pit.

The climax to the event came when Bunji Garlin and Fayann Lyons took the stage with the Asylum Viking band. The high energy set certainly marked the pinnacle of the series of entertainment that was presented throughout the Bacchanal Season.  Bunji and his co-perfomer and wife Fayann, were nothing less than amazing. Reeling out a string of hits including “Truck on the road”, “Carnival Tabanca”, “Red Light District” and many more, the duo kept the pace fast and  the crowd jumping. After an hour of non-stop hits, Bunji Fayann and the Viking band left DJ Richie Ras, Nuphoric and Smoke to keep the vibe going.

As patrons wound down, the beautiful bonfire that was created at the back of the large crowd also ebbed, marking the end to a fantastic night of fun, paint, frolic and superb entertainment.

The next stop on the Bacchanal journey is Bacchanal Jouvert which takes place Friday, 25th at the Mas Camp. Kes the Band along with Patrice Roberts will perform and the night will of course end with the Jouvert road march that will begin at the Mas Camp at 4:00 a.m. and take revellers through the streets as the sun rises marking the prelude to the “pretty mas” parade which will take place on Sunday April 27th.

This article is part 13 of a 14 part series. Other articles in this series are shown below: